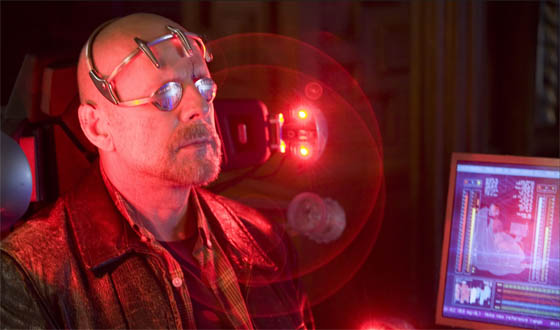 Terminator 3 director Jonathan Mostow returns to cyborgs with the Bruce Willis thriller about citizens who live their lives vicariously through robot avatars. Mostow discusses the implications of his movie and the movie’s similarities to the recently-released Gamer.

Q: This is your first feature film since 2003’s Terminator 3. Why the long gap between projects?

A: It’s hard for me to go to work on a film as a director unless I’m doing something I find very interesting. You really have to have an idea that can sustain you through two years of non-stop work — there are some people who love directing itself so much that it’s not as important they love the material. For me, I really have to be into the idea. When Surrogates came along, I recognized it as something I could spend two years thinking about.

Q: What about Surrogates attracted you to it?

A: I think the whole idea of what is happening in our lives right now with technology leads to really interesting questions. We seem to be heading to a world right now where you really never have to leave your house. On a philosophical level this movie asks the question, what price are we paying both on a societal level — because we are eliminating personal contact — and also on an individual psychological basis for this technology? Now, these are all ideas probably best explored in a long piece in The New Yorker. But I tried to get them in the best I could in a Hollywood movie starring Bruce Willis.

Q: How does Surrogates differ from the graphic novel?

A: I think that what inspired the writer to write the graphic novel is exactly what inspired us. So in terms of the intention and ambition of the movie, I think that’s hugely in tact from the graphic novel. What’s different is we had to make some modifications in the plot to fit the needs of a feature film. The graphic novel had these great interstitial pieces, almost intermissions every 20 pages or so when it starts showing background about the world, and you can’t do that in the movie. The narrative can’t stop, so we had to do a few things that made it work for a movie.

Q: Did your work on Terminator influence your presentation of these surrogates, who are assembly-line cyborgs?

A: It didn’t influence it so much as it made it a challenge of, “OK, if you’re going to show an assembly line of robots, how can we do that in a way that will be as minimally reminiscent of Terminator as possible?” I was very conscious of the fact that another Terminator movie was being made, and I didn’t want to be perceived to be ripping off myself. But the fact of the matter is our robots have endoskeletons, so you take a metal robot and make it in the shape of a human being and there are going to be similarities. The trick was making it so we could get at some of the ideas we had without making it the same thing.

Q: What tricks did you come up with?

A: A lot of it is that you don’t see that much of the true robots in our movie — our movie is full of robots, but they mostly look like people. But really it’s just in the design of it. Terminators have a distinct aesthetic to them, so we tried to steer clear of that.

Q: Has your work on Terminator and now Surrogates made you a technophobe?

A: No. Whenever there’s a new gadget I’m typically the guy that will go out and buy it. Terminator is a movie that said, “Be afraid of technology because it can take over our lives.” This is a movie that says, “Technology is great, it makes our lives better, but at what price?” I think a thousand years from now, historians will look back on this time as a time just as seminal as when mankind first discovered fire or invented the printing press.

Q: Surrogates comes out within a month of another movie where technology allows people to live vicariously through another body, Gamer. Do you think that’s a coincidence?

A: I don’t think it’s a coincidence. The fact is, we’re all aware on some level that we’re living in this turning point. But we don’t know how to talk about it; you don’t go “Hey Bob, how are you? Listen, what do you think is happening to us as a species that we’re always connected to the Internet?” But this movie opens the door to that. I’m not trying to misrepresent this as some soapbox sermon: It’s an action-mystery-film-noir-suspense story, but what’s cool about it is underneath it all are these ideas. And I’m hoping they bubble up for the audience.