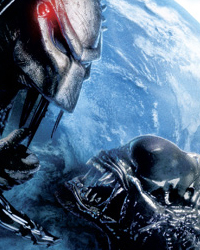 • According to a recent book, Harry Potter scribe J.K. Rowling was declined a literary medal by the Bush Administration due to her “encouragement of witchcraft.”

• A recent script review of Robert Rodriguez’s Predators is making the project look good. It’ll be a hard R, for one, and more like the original than the Aliens Versus Predator series.

• Speaking of prequels, the Alien prequel directed by Ridley Scott may also be in good shape, if a review of the screenwriter’s earlier hard scifi project is anything to go by.

• Apparently, the Terminator franchise isn’t really in that much danger: The Halcyon Holding Group is in better financial shape than expected.

• The awesomest lizard is a Spider-Lizard, which can do everything a spider lizard can.

• According to actual scientific research, the best environment to survive a zombie holocaust is, in fact, the mall.

• Some scans from the menu of the ultimate comic book eatery: Marvel Mania. Try the Galactus for a real world of food.