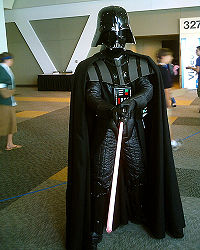 • Edward Norton would like The Hulk to be the villain of the upcoming Avengers movie, but says it’s all an issue of scheduling. Sounds like a guy who doesn’t have a contract to appear as Bruce Banner in spin-offs.

• Entertainment Weekly visits the set of Iron Man 2, and returns with all sorts of goodies.

• ABC’s FlashForward is making references to Lost. Does that mean it’s set in the same universe as Lost, and if so, will Lost’s sixth season have an impact on the show? More likely, it’s a simple case of cross-promotion that ABC did BECAUSE THEY CAN.

• SciFi Wire lists the most amazing (but not necessarily most delicious) science fiction themed cakes.

• Some scifi sadomasochist has been dreaming of this for years: Darth Vader in love, pink helmet, leather and all.

• The Los Angeles Times has a fantastic article about the long running legal dispute between Jack Kirby, Stan Lee and Marvel Comics.