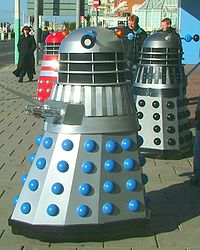 • ABC seems to be pretty nervous about their re-imagining of the classic alien invasion miniseries, V: They’ll only run four episodes this year.

• A blast from the past: Science Fiction Age‘s announcement of the birth of the Sci-Fi Channel. It had such a better name back then.

• The producer of The Sarah Connor Chronicles says that there have been talks to continue the show, possibly as a direct to DVD movie.

• Who’d a thunk? There’s a script for a Venom movie after Spider-Man 3‘s amazing financial success.

• Why We Protest has an interesting thought experiment: What would have happened if Philip K. Dick became a quasi-religious luminary like L. Ron Hubbard.

• Extreme fanboyism: The ultimate Doctor Who fan has spent two years building a Dalek out of 480,000 matches.