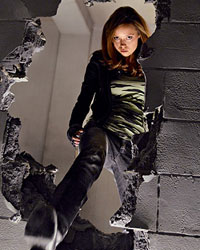 • An obscure Japanese fan site claims that this is an early costume test photo for a Nicolas Cage Superman movie in the late 1990s. Can anyone say Photoshop?

• Fans of the excellent Terminator: The Sarah Connor Chronicles campaign in meatspace for a DVD movie. Good luck guys: The show certainly ended on a cliffhanger.

• Michael Caine clarifies his earlier warrantless speculation: Johnny Depp will not be the Riddler in Batman 3.

• This blog might be my favorite all week: Comic book covers redrawn by contemporary artists. Either art has gotten better this decade, or I’m just easily suckered by the contemporary.

• Need a Halloween costume? Be a Big Daddy. Heck, if that doesn’t get you a Big Sister, I don’t know what will.

• An intriguing possibility: What if Star Wars was made by environmentalists?

• According to Darwinian principles, even Cylons evolve, as they did in the original Battlestar Galactica series.