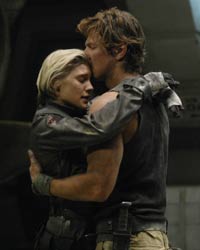 • Cyclops himself claims that X-Men: First Class could start filming in 2010.

• Metamorphose your mind! According to scientists, reading Kafka is a way to better brain power by enhancing your “cognitive mechanisms.”

• What the heck, SyFy? The last Battlestar Galactica movie, The Plan, will debut on DVD in October, but not hit the network until sometime next year.

• SF Signal discusses the death of comics after the buyout of Marvel by Disney and DC’s move towards rebranding. They think Marvel and DC should save comics through a specially designed, cheap, full-color eBook reader like Amazon’s Kindle.

• io9 lists the ten most corrupt mayors in science fiction.

• A great collection of images over at Total Film: 18 Rare and Unseen Star Wars shots. Dig that prototype R2!