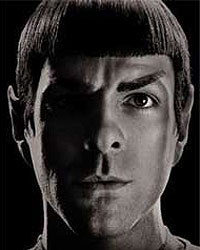 • Heroes returns next Monday, and the stars of the show have some hints and spoilers about the forthcoming season. But are you even still watching after the execrable last two seasons?

• SF Signal hosts another Mind Meld: What book introduced you to science fiction? I honestly can’t even remember, though I suspect it must have been A Princess of Mars or 20,000 Leagues Under The Sea.

• According to Roberto Orci, most people want Star Trek 2 to more reflect “modern times,” hinting that the next Trek might focus on a terrorism-inflicted fight against the Klingons.

• Kirsten Dunst is confirmed to return as Mary Jane Watson for Spider-Man 4, in the off-chance you really think she has great chemistry with Tobey Maguire and wouldn’t watch a Spider-Man movie without her.

• Pixar pooh-poohs the notion of a CGI Ant-Man movie. That’s too bad, because it really is a fantastic idea.

• Katee Sackhoff admits even she has no frakkin’ idea what the heck was going on with Starbuck in Battlestar Galactica.