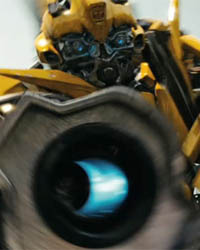 • These are not the words you want to hear from DC when they’re talking about the potential for a Superman movie: “We currenly have no plans for the Man of Steel.” Don’t they have to release one in the next couple of years to maintain the rights?

• The author of the forthcoming Sense and Sensibility and Sea Monsters tells Slate how he incorporated beasts into Jane Austen’s classic.

• Despite his claims to the contrary, Michael Bay could still direct Transformers 3. He’d be a fool not to come back: He’s getting a huge chunk of the merchandising rights on Transformers 2.

• Disney’s Mars and Beyond: The best cartoon about Mars you’ll ever see.

• The story of how an astrophysicist convinced James Cameron to digitally insert an entirely new night sky into Titanic.