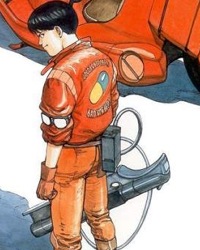 • Neil Gaiman’s basement library is the sort of chthonic scifi reading dwelling that is sure to set a-slaver any true literary geek.

• Patrick Stewart says he’ll probably be back as Professor Xavier for X-Men Origins: Magneto, and is open to a cameo in Star Trek 2 as Picard.

• The live-action remake of Akira may not be dead after all: Rumor has it they are just waiting for a revised script from the screenwriter of the incredible dystopian drama Children of Men. My interest just went up a notch.

• The estate of J.R.R. Tolkien and New Line Cinema have finally reached a settlement in their lawsuit, opening the path to the two Hobbit prequels in the next few years.

• The first shots of Michel Gondry’s Green Hornet have been leaked. Did Seth Rogen lose weight for the role?

• Black Adder scribe Richard Curtis will be writing an episode of Doctor Who next season.