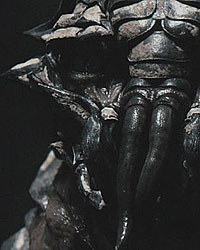 • Neill Blomkamp’s District 9 is being advertised in Thailand as a much more frenetic, robot-filled, Michael Bay sort of picture.

• Japan’s new first lady claims she rode a UFO to the planet Venus. “It was a very beautiful place and it was really green.” Also, the atmosphere is acid!

• Alan Moore thinks that his classic series Miracleman will be published by Marvel, but without his name on the project. He also says Neil Gaiman will be allowed to finish his run on the series. About time.

• Rambo 6 is coming, and lest you think such news has no place on SciFi Scanner, it features Rambo versus genetically modified super soldiers. Keen!

• io9 has posted a fantastic interview with Philip K. Dick’s third wife, Anne Dick. “When Philip left in 1963 and filed for divorce I thought we were deeply in love and had a committed marriage and I couldn’t make sense of what had happened.”