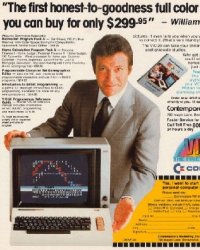 • While it may seem crazy to turn your bathroom into a shrine to Star Wars, it’s certainly preferable to those weird sailboat paintings you see in motels.

• These photos of Darth Vader, Wonder Woman and other scifi characters hanging out are funny and weirdly beautiful. Also slightly NSFW, unless you take photos of superheroes in compromising positions for a living.

• We’re not sure where this behind-the-scenes Star Wars photo of Han Solo and Leia embracing while Luke looks on came from, but it is highly romantic.

• This classic Commodore Vic-20 commercial featuring William Shatner will make you long for the days before the “Mac and PC guys.”

• Here’s an interesting French Batman fan film that suggests what would happen if you combine Sin City, The Dark Knight and weird subtitled film off late-night TV.

• io9‘s look at the best and worst virtual worlds from music videos reminds us just how supremely cheesy and dated Aerosmith’s “Amazing” video is now.