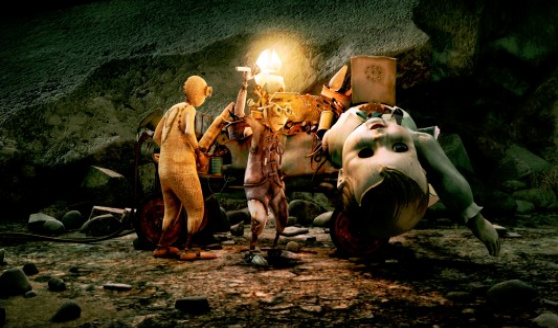 Parents of nightmare-prone youngsters would do well to steer them away from Shane Acker‘s bleak animated fable 9, which unfolds in an all too convincingly dystopian future where machines have annihilated the human race.

9 (Elijah Wood) — a mute, burlap homunculus with sophisticated camera-lens eyes — wakes up in the dusty attic of an abandoned building in a field of rubble with no idea who, what or where he is. A fortuitous encounter with 2 (Martin Landau), a puppet creature like himself, gives 9 some sense of the ravaged world around him. But before he can fill 9 in on the history of how things came to such a dismal pass, he’s snatched up in the jaws of a skeletal metal monster and borne off to some no-doubt dreadful fate, whereupon it falls on 9 and his fellow tribe of numbered puppets to stage a rescue.

Expanded from Acker’s 11-minute Oscar-nominated short, 9 is a series of breathtaking visuals in search of a compelling story. The newbie director’s aesthetic influences are top of the line: The Quay brothers’ nightmarish visions of distressed puppets adrift in decayed landscapes; Wolfgang and Christoph Lauenstein’s Oscar-winning 1989 short Balance; Sylvain Chomet’s The Triplets of Belleville; Jean-Pierre Jeunet and Marc Caro’s Delicatessen and The City of Lost Children; Czech surrealist Jan Svankmajer’s psychologically perverse fairy tales — we’re talking the greatest hits of gloomy, doomy European animation and hyper-stylized live action. And credit where it’s due: On a visual level, Acker does his idols proud — 9 is a flat-out gorgeous vision of a devastated world.

Where 9 falls flat is on the narrative front: Pamela Pettler’s script is as thin and formulaic as Acker’s imagery is rich and original. There’s a bodacious warrior babe (Jennifer Connelly) who joins forces with 9 and 5 (John C. Reilly); a tubby enforcer (Fred Tatasciore) who makes sure their leader 1’s (Christopher Plummer) word is law; a lunatic, 6 (Crispin Glover), whose dreams hold the key to defeating the machines; a back story rooted in the rise of pre-WWII European totalitarianism and an airy-fairy denoument that neither makes much sense nor provides the emotional wallop to which it clearly aspires.

Acker makes it all dismally handsome: The Earth is convincingly scorched, the machines genuinely nightmarish and the found-film footage documenting the rise of the evil regime that doomed the planet gets its Nazi-inspired pomp and grandeur just right. But the simplistic story — simple enough for the same kids likely to be traumatized by the the spectacle of mass destruction and hopelessness — robs 9 and his friends of the chance to make us care. Without that anchor, 9 is just an unusually good looking Punch and Judy show.

To get an alternate movie review of 9, go to AMC Filmcritic.com