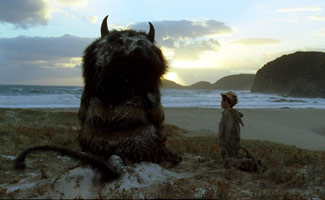 After several stops, starts and delays there’s growing anticipation for the October release of Where The Wild Things Are. For the past two years, the music world has been buzzing about the movie too, specifically about its soundtrack.

Karen O, the arty and brash lead singer of Brooklyn-based rock trio Yeah Yeah Yeahs, has been writing and recording new songs for the movie with a rumored list of respected indie rock musicians. Last week details about the film’s soundtrack were finally revealed further fueling the anticipation.

Where the Wild Things Are is directed by O’s ex-boyfriend Spike Jonze (Being John Malkovich, Adaptation)
who also co-wrote the screenplay with novelist Dave Eggers. It’s based
on the popular 1963 children’s picture book by author/illustrator
Maurice Sendak. In the story, a boy named Max is sent to his room
without dinner. He then runs away to the fantasy world of the Wild
Things — a place full of gargantuan creatures and beasts — where he’s
named their king. In 2008 Jonze told Rolling Stone he wanted
his version of the classic story to be true to his own experiences as a
child, saying, “Basically, I wanted to take this nine-year-old kid
seriously as a person who is trying to understand the world and
himself.”

Choosing the right musician to channel both the serious and
childlike elements of the fantasy storyline into the film’s soundtrack
was key. According to DGC/Interscope Records, Karen O was the right fit
to craft songs for the movie because she and “her music possess something of a
child-like innocence, a guileless charm that put her exactly on the
right emotional wavelength to sonically capture the film, be it a
tender moment or a wild rumpus.”

O didn’t put the soundtrack together by herself. She collaborated with film score composer Carter Burwell (No Country for Old Men, Twilight)
and wrote songs with a who’s who of the indie rock world. In 2007 news
of her new project spawned numerous  postings wondering who she was
working with and what kind of songs they were recording.

We know now the group she put together, dubbed “Karen O and the
Kids,” includes members of Afternoons, Deerhunter, Queens of the Stone
Age, The Greenhornes, Gris Gris, The Dead Weather, The Raconteurs, New
Folk Implosion, Liars, The Bird and the Bee, and her YYY band mates,
Nick Zinner and Brian Chase.

“I didn’t want to make music that was hammering you over the head or
go for some kind of pushbutton emotion,” O said in a statement. “What I
initially wanted to do was close to Cat Stevens in Harold and Maude,
really simple, but memorably and seamlessly woven into the movie.” She
even enlisted an untrained children’s choir to round out some of the
tracks.

Last year Deerhunter frontman Bradford Cox, a member of Karen
O’s “Kids,” told music website Pitchfork that the songs she wrote were
“radical and honest.” He added, “I’ve never had a better time in my
life playing music with people. The audiences for the music and the
movie should be stoked because it’s going to blow them away.”

In an interview this year with MTV News UK, Karen O raved about the
soundtrack project and Jonze’s movie, saying, “It was a really amazing
experience and I think what [Jonze] has accomplished with the film is
basically the impossible.”

This isn’t the first time that Jonze and O have collaborated
professionally. In 2004 he directed Yeah Yeah Yeahs’ creepy, yet oddly
comical, Children of the Corn-ish music video for “Y Control.”
That same year Jonze directed the band’s visually stunning and trippy
performance of their hit “Maps” at the MTV Movie Awards.

The following year Jonze directed an Adidas commercial, “Hello
Tomorrow,” using a song written by his brother Sam Spiegel, aka Squeak
E. Clean, and sung by Karen O. The commercial won the Gold Lion award
for Best Use of Music at the Cannes Lions International Advertising
Festival in France, known as the “Olympics of Advertising.”

Over the years Jonze has created eclectic and groundbreaking music
videos for artists like Beck, Kanye West, Bjork, The Notorious B.I.G.,
Ludacris and The Chemical Brothers. In the video world, he’s known for
classics like Beastie Boys’ “Sabotage,” Weezer’s “Buddy Holly” and
Fatboy Slim’s “Praise You.”

Where The Wild Things Are is not Karen O’s first foray into
the soundtrack world. In 2006 she recorded “Backass” with potty-mouthed
electronic artist Peaches for the soundtrack to Jackass Number Two. She followed that with a Bob Dylan cover on the soundtrack to I’m Not There, the 2007 Dylan biopic starring Cate Blanchett, Christian Bale, Richard Gere and Heath Ledger.

“All Is Love,” the first single by Karen O and the Kids from the Where The Wild Things Are soundtrack, debuts today on digital services. The album drops on Sep. 29; the movie arrives in theaters on Oct. 16.