With the Julia Child-centric Julie & Julia coming out this weekend, we’re in the mood for some nourishment. We’re not talking about popcorn and stale nachos here, we’re talking about the best meals ever served in movies. We’ve got all your food groups represented here: Noodles, meatballs, pizza, turtle soup, human (three times!) you name it. Whether they’re going down easy or coming back up the hard way, you’ll find these unforgettable feasts in some of our favorite movies.

Please enjoy this admittedly fanciful list of the 25 most memorable meals served in the movies — both good and bad. Bon appétit!

[Stuff we forgot (thanks, readers!): Meg Ryan’s orgasmic meal in When Harry Met Sally; Divine’s ‘snack’ in Pink Flamingos; 9 1/2 Weeks’ fridge feast; The Breakfast Club‘s ‘wholesome lunch’… and I’m sure some others…]

24. F for Fake (1976) – My favorite moment in this documentary is when an obese Orson Welles, narrating the film from the dinner table, interrupts his monologue so he can order the waiter to bring more food. Classic. 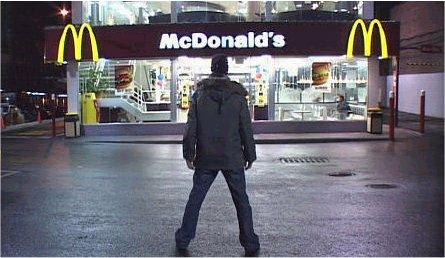 23. Super Size Me (2004) – Early on in Morgan Spurlock’s McDonald’s-only dining misadventure, his Big Mac comes back up and is expelled into a parking lot.

22. A Clockwork Orange (1971) – Lying in his hospital bed, Alex is spoon-fed by a government official while amends are made for the experiments performed on him. No idea what he was eating, but the way he ate it, popping his mouth open into a big ‘O’ with each bite, is unforgettable.

21. Leaving Las Vegas (1995) – A shaking Nicolas Cage gets his alcohol-induced tremors under control by sucking down some orange juice in front of the fridge.

20. My Dinner with André (1981) – Honestly I have no recollection of what they actually ate during this meal, but the conversation was to die for. 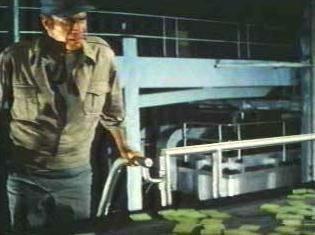 19. Soylent Green (1973) – It’s the only movie title on our list that is actually the name of the centrally-featured food. And it’s peoplicious!

18. Apocalypse Now (1979) – No, not the ritual sacrifice of a caribou at the end. This memorable meal’s right near the beginning. ‘Captain, I don’t know how you feel about this shrimp, but if you’ll eat it, you’ll never have to prove your courage in any other way.’ I dunno. I thought that shrimp looked pretty good.

16. Eat Drink Man Woman (1994) – A film that’s full of wonderful meals, each more delicious-looking than the last. Remade with a Hispanic bent as Tortilla Soup (which also looks too good to eat).

15. Saturday Night Fever (1977) – Tony Manero demonstrates how to eat pizza in Brooklyn: Two slices, stacked atop each other, folded in half and consumed single-handedly. That’s class, people.

13. Blazing Saddles (1974) – Yeah, a juvenile one. All ’round the campfire for a cookout, and we all know what beans do to the lower intestinal tract. 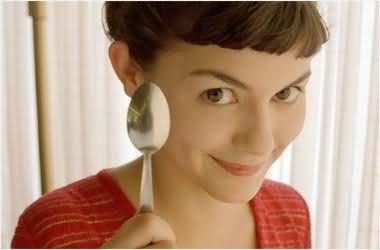 12. Amelie (2001) – Amelie’s special way with crème brulee was such an iconic image it became the basis for the poster for the film.

10. Hannibal (2001) – Hannibal Lecter talked a lot about eating livers and fava beans in The Silence of the Lambs, but we never got to see it. Here he forces Ray Liotta’s cop to eat his own brain. At the end of the film, he feeds it to a kid on a plane. Whoa, buddy! The TSA says there’s no way you’re bringing that brain on an airplane now.

9. The Gold Rush (1925) – A broke Charlie Chaplin cuts into shoe leather in lieu of a steak. Inspired a century of cartoons wherein articles of clothing are consumed when actual food isn’t readily available.

8. Tampopo (1985) – Juzo Itami’s Japanese spaghetti western is about a drifter who blows into town in search of the perfect noodle restaurant, which he eventually finds. It’s the only spaghetti western that’s actually about spaghetti.

7. Indiana Jones and the Temple of Doom (1984) – The chilled monkey brains and eyeball soup were just parlor tricks: It was the ‘snake surprise’ that was the real centerpiece to Indy’s most famous meal.

6. Pulp Fiction (1994) – Vincent Vega (John Travolta, making the only double appearance on this list) is involved in not one, not two, but three memorable meals in Pulp Fiction. Though they don’t appear in order chronologically, Vega endures a Mexican standoff in a diner (‘Bacon tastes good. Pork chops taste good.’), enjoys a ‘Five Dollar Shake’ before memorably hopping up on the dance floor, and ultimately meets his end while his assassin is cooking Pop-Tarts while Vega’s using the toilet.

5. The Phantom of Liberty (1974) – In Luis Buñuel’s masterpiece, guests at a dinner party don’t actually eat at the table; instead they sit on toilet bowls. To eat, a diner must excuse himself and go to the bathroom, where the food is eaten alone and in silence. This send-up of high society is still unbearably funny and original. 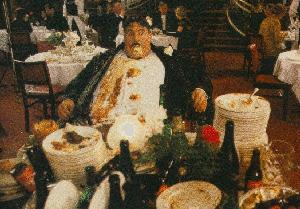 3. Big Night (1996) – I actually made a timpano after being inspired by Big Night‘s incredib
le feast, where Louis Prima fails to show. I’m sure mine paled in comparison to the real deal, but it was still really good, even though making it nearly killed me.

2. The Cook, the Thief, his Wife, and her Lover (1989) – One of these characters will prepare the film’s final meal, and one of them will be the final meal. The preparation of a man a la suckling pig is grotesque yet impossible to turn away from. 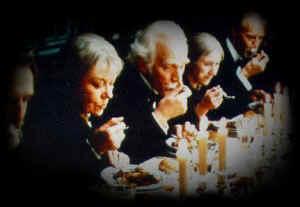 1. Babette’s Feast (1987) – Virtually the entire running time of Babette’s Feast consists of a poor maid, who has won a good amount of money in the lottery, preparing a ridiculously expensive meal for guests who couldn’t possibly appreciate it. The film’s theme of sacrifice is intertwined with its meticulous investigation into gastronomy and the importance of food. Even if you’re not an art-house freak or a foodie, it’s enough to make you hungry for both seeing the film again and eating a few of its delicacies. Bring on the turtle soup!