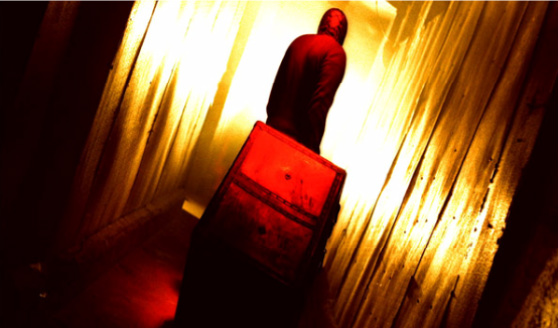 The kind of movie for which the term “Hard R” was coined, The Collector is a mean-spirited throwback to the nastiest, cruelest home-invasion movies of the ’70s and ’80s. And I mean that in the best possible way: If Bryan Bertino conceived The Strangers (2008) as a slick variation on gritty grindhouse flicks like Fight for Your Life, Death Weekend and The House on the Edge of the Park, Marcus Dunstan and Patrick Melton (they came into the Saw franchise with Saw IV and are still with it) actually set out to raise — or should that be lower? — the down-and-dirty bar. Suffice it to say that they succeeded admirably.

Ex-con Arkin (Josh Stewart) is one of life’s natural-born losers: He’s broke, condemned to a series of dead-end jobs, indebted to his jailhouse protector and gradually losing the sad-eyed daughter (Haley Pullos) who he adores but has disappointed one too many times. The last straw: Arkin’s ex-wife needs big money by midnight; she’s in hock to loan sharks and if she doesn’t pay up, they’ll do whatever loan sharks do to welchers. So Arkin makes a rash decision. He’s been working a construction gig, renovating the kind of house he’ll never own for successful jeweler Michael Chase (Michael Reilly Burke) and his family: Botoxed beauty Victoria (Andrea Roth of TV’s Rescue Me), trampy teen Jill (Madeline Zima) and pampered, eight-year-old Hannah (Karley Scott Collins), who’s living the life Arkin wishes he could give his own little girl. Arkin knows the Chases are leaving on vacation later in the day, and he knows there’s a ruby as big as the Ritz in the upstairs safe. So come nightfall, he dons a ski mask and quietly breaks into the empty house.

Except that it isn’t empty: Someone hidden behind a lace-up S&M mask is busy brutalizing Victoria and Michael, someone who’s rigged every door, window and other means of egress with crude but cruelly effective booby traps. It’s going to be a whole lot harder to get out than it was to get in, especially once Arkin realizes that little Hannah is hiding somewhere in the house and doesn’t stand a chance on her own.

Yes, The Collector is derivative; genre buffs will see echoes of movies as diverse as Aliens, Straw Dogs, Audition, and the Bruce Willis thriller Hostage. No, the set-up isn’t entirely plausible and one shot of a spider spinning its deadly web would have been quite enough. But Melton and Dunstan know how to tighten screws, ratchet up stakes and regularly give the knife an extra twist. Oh, and make a mental note of that wasp’s nest that makes a brief appearance in the first act — somewhere Chekhov is smiling.