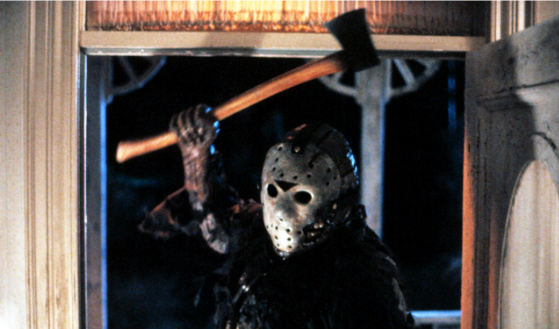 I’ve talked about everyone’s favorite deformed, drowned child-turned bag-headed, woods-living kookadook-turned slimy super-zombie plenty of times in the past. But have I ever really addressed just why it is that Jason takes all those lickings and keeps on ticking? No, I haven’t. But I will now: What keeps fans flocking to Friday the 13th movies is that Jason is one creative killer.

Mind you, he’s not constructing elaborate death traps a la Saw‘s Jigsaw, nor is Jason able to morph into a living weapon like his archenemy, Freddy Krueger. Jason Voorhees is a simple psychopath, possessed of two hands capable of wielding a near-infinite variety of lethal objects, a fact that makes his originality all the more impressive. Here are ten of his most memorable kills.

10. Death on Wheels (Friday the 13th, Part 2)
Proving that he’s an equal opportunity slayer, Jason makes short work of wheelchair-bound Mark (Tom McBride) with a machete to the head. Adding insult to fatal injury, Mark’s chair then bounces backwards down a staircase… in the rain, yet!

9. Mobile Home Makeover (Friday the 13th, Part VI: Jason Lives)
Sometimes, all you wanna do is have sex in a borrowed Winnebago, then drive around rocking out to horrible music. Leave it to some weirdo in a hockey mask to come along and smash your face into the side of the RV.

8. Cleave It to Beaver (Jason Goes to Hell: The Final Friday)
Sometimes, all you wanna do is have sex in a tent. Leave it to some doctor who ate the heart of some weirdo in a hockey mask and is now possessed by said weirdo to come along and rip you in two with a barb-wired spike.

7. Eyeballz-a-poppin’ (Friday the 13th, Part 3)
Rick (Paul Kratka) seemed like a really nice guy — so it seemed a shame when Jason squeezed his head so hard that his eyeball popped out and flew off into the night. Wait, what am I saying? Flying eyeballs are the reason 3D was invented!

6. Craftmatic Adjustable Corpse (Freddy vs. Jason)
Trey (Jesse Hutch) is one of those characters who’s such a jerk that you find yourself willing the knife-wielding maniac to get the killing over with already. Watching Trey get stabbed and then folded up in his bed like so much Memory Foam is nothing less than sweet, sweet satisfaction.

5. Simply smashing (Jason X)
I can’t decide whether launching Jason Voorhees into outer space was the best or the worst idea in the history of ever. One thing’s for certain, though: Jason dunking a scientist into a tub of liquid nitrogen and then smashing her frozen face into a zillion tiny pieces was one great idea.

4. Triple play (Friday the 13th, Part VI: Jason Lives)
If they weren’t so annoying, I’d almost feel sorry for the three camo-wearing, weekend-warrior paintballers who run afoul of Jason in the woods. They weren’t headed to Camp Crystal Lake, they weren’t having sex… what did they do to deserve the chop chop? Oh well — at least Jason dispatched all their heads with one fell swoop. No suffering for them, questionable entertainment for us!

3. Handstand to Hell (Friday the 13th Part 3)
Pop quiz, hot shot! People who walk on their hands: Impressive or irritating? If cutting the hand-walking Andy (Jeffrey Rogers) is any indication, Jason clearly votes for “irritating.”

2. Jason Takes Your Head Off (Friday the 13th Part VIII: Jason Takes Manhattan)
Oh, Julius (Vincent Craig Dupree)… I do so admire your moxie in attempting to lure Jason into some good, old-fashioned rooftop fisticuffs. Really, you gave it your best shot. Jason’s best shot is a helluva lot better, though. Decapitation with one punch? I’m sure even Julius would have been wowed had he not been, you know… headless.

1. Sleeping Bag of Doom (Friday the 13th Part VII: The New Blood)
Confronted by a hulking masked menace, Judy (Debora Kessler) opts for a familiar-but-stupid approach to self-preservation: She hides in a sleeping bag. Surely if she can’t see Jason, then he can’t see her either, right? Uh… wrong. Really wrong. Jason himself was undoubtedly smirking as he repeatedly slammed the Judy-filled bag up against a tree; audiences certainly were.

Because I’m not a psychopath, I’ll admit that it feels a little weird to “celebrate” the deeds of an off-the-scale nut job like Jason. But the Friday the 13th movies are meant to be entertaining, and there’s no doubt but that I’ve been entertained: The proof is in the big, goofy grin on my face during the sleeping bag sequence. There have been close to 200 kills during the Friday franchise’s long history; which ones did you find most memorable? It’s OK to share — I promise I won’t think you’re weird.

A fan of horror movies and scary stuff, Stacie Ponder started her blog Final Girl so she’d have a platform from which she could tell everyone that, say, Friday the 13th rules. She leads a glamorous life, walking on the razor’s edge of danger and intrigue.