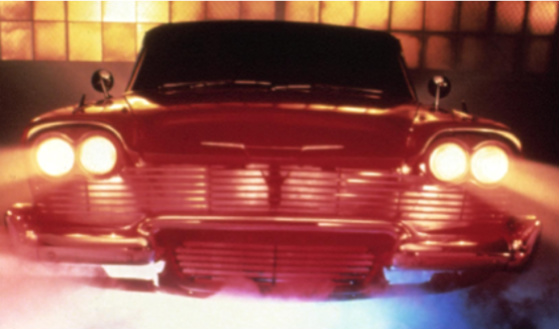 Ah, the American love affair with the car … well, you know, before that whole “let’s take billions and billions of our tax dollars and give them to a private, for-profit enterprise” thing. Bitchin’ cars and movies have always gone hand in hand, but nowhere is that cozy courtship more apparent than in horror flicks.

My focus here is unique cars: Cars that kill you, swallow your soul and/or become recognizable characters. I’m sure you’ve been waiting for someone of my utterly refined tastes and keen highbrow observational abilities to properly define and categorize this sub-genre, so allow me to put down my PopTarts, drain my Bud Light and present to you Uncle Scottie’s Top Ten Horror Movie Cars.

10. The 1971 Lincoln Continental Mark III from The Car
How can you go wrong with this beauty? It’s a movie about a killer car, so it’s called, “The Car.” A major artifact from the heyday of murderous vehicles (The Car, Duel and Death Race 2000 all came out within the same five-year period), it starred James Brolin, Kathleen Lloyd and a tricked-out Lincoln Continental. The combination of orange-red “driver cam” POV shots and a horrific car horn that sounded as each victim was claimed created a unique horror flavor. Warning: Unique doesn’t mean good. Used motor oil has a unique taste, but I wouldn’t recommended swapping your Coke for Castrol.

9. The Killer Road in Dead End
So it’s not really a killer car, but it’s a wacky killer road. No matter what you do, you wind up on the road, passing the same signs, the same landmarks. Stop, get out and run through the woods? You wind up back on the road. Is this a good movie? No. Is it an interesting metaphysical analogy for the linear path of life and the inevitability of repeating our cultural and personal mistakes? Yes. What, you though I just mainlined The Real Ghostbusters all day?

8. 1984 Dodge M4S from The Wraith
OK, so this Charlie Sheen/Nick Cassavetes movie ain’t that great, but we’re talking cars, man! Cars! And it doesn’t get much better than the supernatural motorized badassery that is the real star of the movie, a 1984 Dodge M4S. Supposedly, only four of these concept cars were ever made. Truth? They made one, and it channeled the spirit world to clone copies of itself. The movie carried a high price — a camerman died during one of the many chase scenes.

6. Ecto1 from Ghostbusters
Oh, the cruel irony. A vehicle used to ferry the dead, re-worked, modded and hot-rodded into a vehicle that ferries the destroyers of the dead. Oh, cruel afterworld!

5. The Goblin Truck from Maximum Overdrive
It’s a friggin’ semi with a green goblin head. And let’s be honest, we all wanted the semi to win. Damn you, Emilio Estevez, and damn your handy rocket launcher!

4. The Possessed Bulldozer from Killdozer
With a name like “Killdozer,” do I even need to justify this vehicle’s place on the list? It’s an alien-possessed bulldozer that kills you. It’s Jaws on a construction site, only with something far more durable than old Bruce.

3. 1973 Delta Olds 88 from The Evil Dead/The Evil Dead 2: Dead by Dawn/Army of Darkness
Of all the vehicles on this list (with the exception of number one below), how many starred in multiple movies? Appearances in all three Evil Dead movies lands the 1973 Delta Olds 88 high on the list. It was part of some of the most innovative low-budget chase scenes in movie history in the early movies, and for Army of Darkness that massively modded m-fer turned into an undead killing machine (er … a “re-killing” machine, maybe?). What’s more, there is a rumor that the Olds has been in every Sam Raimi feature film, although I can not confirm that.

2. 1958 Plymouth Fury from Christine
Yep, no way you can make a list of killer cars and not put in this cherry 1958 Plymouth Fury (although a Plymouth Belvedere was used for much of the movie.) Stephen King’s novel and the subsequent adapation focused on the American car culture and the oft-disturbing relationship between men and their labor-of-love vehicles.

1. The Mystery Machine from Scooby-Doo
You all thought the Goblin Truck or Christine would wind up parked in the number one slot, did you not? Admit it. But now that you see my awesome pick, first you agree that I’m right and second, that you’re looking for a way to kick yourself for not having thought of it right off the bat. No vehicle in history has been involved in more ghost-related shiz than this cartoon and live-action movie van. Sure, they usually debunk the ghost story, which makes the Scooby Gang early proponents of the Skeptical movement, and probably fueled the minds of Jamie and Adam from Mythbusters. No question, the top horror vehicle of all time is the Mystery Machine.

New York Times best-selling author Scott Sigler writes tales of hard-science horror, then gives them away as free audiobooks at www.scottsigler.com. His novel INFECTED was named as the Border’s #1 mystery, thriller and horror novel for 2008. CONTAGIOUS is in stores now and THE ROOKIE will be available in August. If you don’t agree with what Scott says in this blog, post a note in the comments section below. Please include all relevant personal information, such as your address and what times you are not home, so Scott can come visit and show you his world famous “Chicken Scissors.”