You don’t normally think of Alfred Hitchcock and fantasy in the same sentence, but believe it or not, the Master of Suspense contributed one crucial element to the genre: the MacGuffin. “What is a MacGuffin?” you say. It’s the thing that everyone in the movie wants, the thing that drives the plot even if it’s never actually held. Hitchcock explains, “In crook stories it is almost always the necklace and in spy stories it is most always the papers.” And in fantasy? Well… there the playing field gets a little wider.

10. The One Ring — The Lord of the Rings (2001-2003)
As a true MacGuffin, this is a little lacking. The One Ring drives the plot, yes, but except for very brief segments our hero always has it. What’s more, it actually plays a pivotal role in the movie. Having a useful MacGuffin is just crazy talk. To be archetypal, you ought to be able to swap it out for almost anything else and not notice the difference. Sadly, the plot dictates the ring be a ring.

9. Medallion and Chosen One — The Medallion (2003)
This is a tricky MacGuffin in that it’s a three-parter, with conditions. Let’s see: You need two halves of the Medallion, a Chosen One, and then all you need to do to get supernatural powers and immortality? Die. That’s it. What’s fun about this MacGuffin is that once it’s engaged, the rest of the movie is just about chasing around after it. And that, my friends, is where the MacGuff-fun begins.

8. Triangle of Light — Lara Croft: Tomb Raider (2001)
Another mulit-parter, the Triangle of Light controls time and space. But the original builders decided it was too dangerous, so they split it in half. (Why oh why do people insist on keeping dangerous things about instead of destroying them in the first place? Oh, right, because we need MacGuffins.) Not enough to simply bring the two pieces together, however, you have to know how to solve the puzzle, which luckily our gal Lara does, enabling her to resurrect her friend and chat with long-dead Dad. 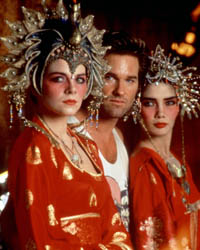 7. Girl with Green Eyes — Big Trouble in Little China (1986)
Lest you think that a MacGuffin must always be an object, oh no, my dears. A MacGuffin can be a person too, and Miao Yin (Suzee Pai), the Girl with Green Eyes, is the epitome of the type. She is a total placeholder with zero characterization. She arrives at the airport, gets kidnapped, and then spends the rest of the film in a trance. What does everyone else do? Chase around after her, of course!

6. Talisman — Red Sonja (1985)
Talisman? Really? You’ve got a magical sphere capable of destroying the world and the best name you can come up with is Talisman? You know, they aren’t even trying to pretend this isn’t a MacGuffin. Destroy the world? Whatever. Just chase me, baby.

5. Horcruxes — Harry Potter Series (2001-2011)
Over how many movies have we been trying to destroy Horcruxes now? Really, these are stellar MacGuffins because not only are they multi-parters (see above), but it’s built into the plot that the Horcrux can be anything. Harry could have saved time if Dumbledore had just taught him the Accio MacGuffinum spell.

4. Ark of the Covenant — Raiders of the Lost Ark (1981)
Oh, yeah. Let’s go on a crazy ride across multiple Nazi-infested landscapes, risk life and limb trying to find the MacGuffin. And then, when we finally find it, put the thing in a box in a warehouse. You know how you can tell that the Ark of the Covenant is a MacGuffin? Because they swapped it out for different MacGuffins in each of the other movies and then used the exact same plot — except for that whole Mayan alien thing. Do not try and blame Hitchcock for that one.

3. Gold Coin — Pirates of the Caribbean: The Curse of the Black Pearl (2003)
Will Turner’s (Orlando Bloom) coin, which everyone is after, sets the (ahem) gold standard in fantasy. Why? Because for great swathes of the movie everyone all but forgets what they’re chasing after. It’s all a big chase scene and the coin that drives the plot becomes secondary to Johhny Depp’s drunken witticisms.

2. The Holy Grail — Excalibur (1981)
You know the phrase, “It’s the Holy Grail of…?” You can easily substitute that for “It’s the MacGuffin of…” because they’re both important motivators that are frequently unattainable. In fact, the search for the Holy Grail exists solely because Arthur looked at his band of knights and decided they needed a quest. What does that mean? It means the MacGuffin might as well be anything. Even…

1. Shrubbery — Monty Python and the Holy Grail (1974)
Oh, sure, the movie is called “Holy Grail,” but that’s only one of the myriad magical MacGuffins here. The moment of perfection comes when the Knights Who Say Ni demand shrubbery! Which makes absolutely no difference in the plot, but does require an epic quest. Sadly, King Arthur turns down the second MacGuffin they offer, another shrubbery and a feat of derring do — “to cut down the mightiest tree in the forest with… a herring!” That would have been the best MacGuffin ever.

Mary Robinette Kowal is the winner of the 2008 John W. Campbell Award for Best New Writer and a professional puppeteer. Her first novel Shades of Milk and Honey is being published by Tor in 2010.