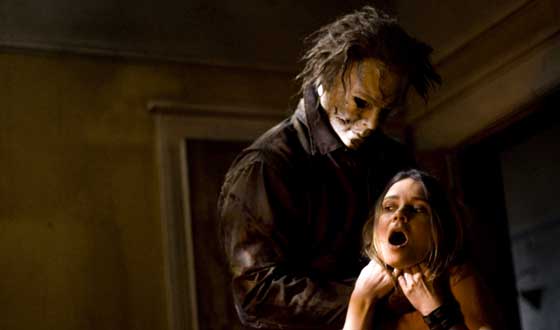 October 31: Laurie Strode (Scout Taylor-Compton) walks down a deserted Haddonfield street, covered with blood and on her way into deep shock. She’s intercepted by sympathetic Sheriff Brackett (Brad Dourif), who takes her to the same hospital where doctors are feverishly trying to save his own daughter, Annie (Danielle Harris). Back at the crime scene, Dr. Loomis (Malcolm McDowell) is loaded into another ambulance, while the body of Michael Myers (Tyler Mane) is bagged and dispatched to the coroner’s office. And then everything goes horribly wrong: There’s a gruesome accident, Michael’s body vanishes, and Laurie, hobbled by an arm cast and a leg brace, is running again. Or is that hobbling? But wait — it’s all just a dream!

When Laurie wakes up, it’s almost a year later — October 29, to be precise — and she’s living with Sheriff Brackett and Annie. Laurie is trying to move forward, but despite the best efforts of her therapist (Margot Kidder), she’s borne back ceaselessly into the past by vivid nightmares and the knowledge that Michael’s body vanished and was never found. Laurie is hanging onto normal life by a thin thread that begins to fray when Dr. Loomis comes to town hawking his new book, The Devil Walks Among Us, which proclaims that Laurie is really Angel Myers, Michael’s other sister. Blood is thicker than water; Michael is on his way home.

The dream sequence that would be a cheap “Boo” is most contexts, here pays tribute to the original Halloween II, then allows Zombie to move on to what really interests him: Laurie Strode’s heroic efforts to remake herself in the shadow of unimaginable horror, in a Haddonfield suspended somewhere in and out of time. There’s a flat-screen TV in Loomis’ hotel room, but The Moody Blues and silent-era cartoons flicker across Laurie’s tiny B&W set; the cars are a mix of new and old, but home phones are all clunky old dial units and no-one has a mobile phone. Even the characters’ clothes are carefully calibrated to evoke both past and present, from the Rocky Horror Picture Show gear Laurie and her new best friends Mya (Brea Grant) and Harley (Angela Trimbur) don for Halloween to the goofy knit caps and bell-bottoms that could be retro-chic or just podunk-town uncool.

Halloween II is bound to be polarizing: If you like your Michael Myers a cipher, purely and simply evil, odds are you’ll hate the lengthy hallucinatory sequences that unite the grown Michael, his mother (Sherri Moon Zombie) — now a belle dame sans merci in diaphanous white — and his younger self (Chase Vanek) in a never-never land of glittering snow and pumpkin-headed grotesques. But Zombie’s gorgeous B&W fantasy sequences — which owe their gothic glory to ’60s horror all’italia — are the perfect counterpoint to the movie’s all-too-real evocation of crass, cynical, real-world exploitation, embodied in everything from Loomis’ book to the facade of seedy strip-club The Rabbit in Red, which now boasts that Michael Myers’ mom once bared her boobs there.

Every generation gets the monsters it deserves, and Rob Zombie’s Michael Myers is a true demon of the 21st century. How do you think it stacks up against its predecessors? Tell us now!