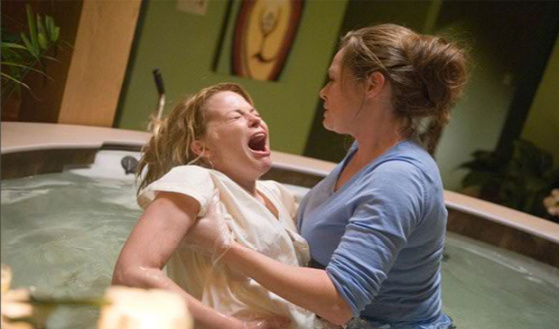 Everybody loves babies: They’re so little and cute and trusting and helpless. Except, of course, when they’re monsters, mutants, possessed by demons, or the spawn of the devil — then it’s hello, pregnancy panic attack!

In Paul Solet’s Grace, Madeline Matheson (Jordan Ladd) desperately wants a baby, but when she finally gets pregnant she’s hurled headlong into a battle of wills with her steely mother-in-law, Vivian (Gabrielle Rose). Vivian dotes on her milquetoast son, Michael (Stephen Park), and alternately patronizes and belittles Madeline, whose gentle, neo-hippie inclinations strike the predatory Vivian as childishly naive. But Madeline stands by her naturopathic guns, and not only refuses to see the doctor Vivian recommends but insists on entrusting her care to feminist midwife Patricia Lang (Samantha Ferris). If Vivian ever found out that Patricia and Madeline used to be lovers, well, that would be a battle of the Alpha girls to see.

But it never comes to that, because a late-night car crash kills Michael and the baby, which Madeline insists on carrying to term. Wonder of wonders, baby Grace somehow emerges alive, and the beatific Madeline retreats into a cocoon of new motherhood, too radiantly happy to acknowledge that there’s something not quite right with her miracle baby. Grace smells a little off, attracts flies like last-week’s mackerel and won’t eat, at least not until horrified vegetarian Madeline realizes that Grace is a natural born carnivore. Meanwhile, momster-in-law is plotting to wrest her son’s child from “that woman,” midwife Patricia is increasingly concerned about Madeline and Grace’s health and her current girlfriend (Kate Herriot) is getting all Jan Brady about the “Madeline, Madeline, Madeline” drama that’s taken over their relationship.

Writer-director Solet’s first feature descends from a long line of tales rooted equally in primal fears about childbirth and modern-day parenting neuroses: What’s going on in there? Is my baby normal? Am I crazy (or even evil) because I sometimes resent the mewling, puking, endlessly demanding life I brought into the world? Unlike Rosemary’s Baby — the standard by which all pregnancy terror movies are judged — which plays the situation chillingly straight, Solet adds a dash of pitch-black humor to the mix. By the time you get to the kicker ending, it’s hard to say who’s the real monster: Sure, the ghoulish Grace is some kind of vampire-zombie something, but her nature was thrust upon her, whether by Madeline’s suffocating, all-consuming lust to have a child at any price, or Vivian’s predatory, survival-of-the-meanest genes. The various women who want Grace make some pretty scary choices — (s)mother love comes in all shades of crazy.

If Grace had been made by a woman, it would lend itself to being read as a feminist critique of the cult of maternal selflessness that labels any woman who wouldn’t sacrifice anything — anything — for her baby is a bad mother. Since it was made by a man, it’s hard not to see a touch of neglected-husband discontent: If Michael weren’t dead he’d be in marital exile, reduced to staying out late with the guys and wondering whether his wife is ever going to notice him again. Or maybe Madeline wouldn’t be so obsessed if Grace had been born under less traumatic circumstances…  the subtle ambiguities give Grace a sly, queasy edge, and Solet knows both how to construct a classic suspense sequence and how to cut loose and pour on the gore. Which is as it should be: Pregnancy is the ultimate white-knuckle waiting game and bearing children is no job for the squeamish.