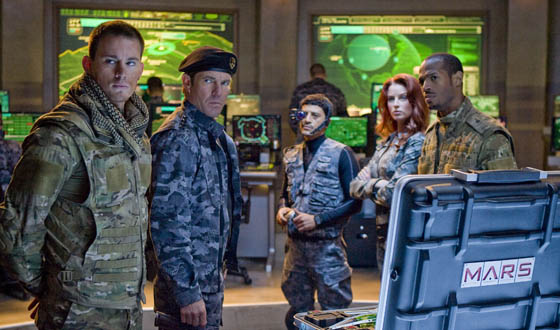 G.I. Joe: The Rise of Cobra. Granted, the movie — which boasts “in association with Hasbro” in its opening titles — was never likely to become a critical darling. But if the standard is “goofy summer fun” then G.I. Joe, with its underwater cities, metal-eating nanobots and jetpacks, is how it should be done. Nevertheless, I write this after catching a midnight screening at the multiplex — the closest Paramount Pictures allowed us critics to get to a sneak peek of their $200 million toy story.

The obvious and easy comparison is, of course, to Transformers: Revenge of the Fallen, which shot to the top of the yearly box office charts with a conceptually similar audiovisual assault. The main difference is that, unlike Michael Bay, Stephen Sommers has a plausible claim to being an actual filmmaker — he knows how to pace a movie, how to shoot an action scene, and even, vaguely, how to tell a story. Most importantly, he’s in control of tone: G.I. Joe doesn’t have a self-important bone in its body. This is a movie that opens in 1641 France and somehow manages to cut directly to Christopher Eccleston pitching nanotechnology-enhanced warheads in “the not-too-distant future.”

For the uninitiated, the movie’s title refers to an ultra-elite, transnational military unit with apparently limitless resources and access to all manner of impossible gadgetry. Their mission is to stop Eccleston’s fanatical arms dealer from destroying much of the world with his unstoppable green nanobot goo. The movie adds some convoluted history: G.I. Joe‘s newest recruit, Duke (Channing Tatum) used to be engaged to the villain’s primary henchwoman (Sienna Miller), until her brother (Joseph Gordon-Levitt) was killed on Duke’s watch, or so it would seem. It plays very much like the mythology behind something much bigger than a cheerful two-hour action romp, and for better or worse, G.I. Joe enthusiastically teases a sequel.

A prerequisite for enjoying this stuff is a high tolerance for silliness that’s not just deliberate, but aggressive — the movie mocks you for caring about logic, continuity, or dramatic plausibility. Even if you fit the bill, there’s ultimately no there there. G.I. Joe is the definition of cinematic empty calories. It’s like stuffing your face with cotton candy in lieu of dinner.

Most tragically, Sommers (Van Helsing, The Mummy) is a competent but undistinguished technical filmmaker. G.I. Joe‘s centerpiece — an extended chase through Paris featuring SUV’s, rocket launchers, and “accelerator suits” — looks great, but many of the other action scenes are frenzied and incoherent. The saving grace is that Sommers is confident enough to plow through this stuff without lingering on plot points or special effects. The unpretentiousness makes up for a lot.

And there are some affirmative pleasures too. While none of the good guys distinguish themselves, the actors playing the villains are over-the-top, absurd, and pitch-perfect: Christopher Eccleston, with his English accent and hungry glare, is like a classic Bond baddie, while Joseph Gordon-Levitt is hilariously deranged as the mad scientist who eventually becomes the fabled “Cobra Commander.” The screenplay features an occasional witty flourish. (“I’m gonna make you very unhappy,” Eccleston boasts to Tatum, who deadpans: “I’m already unhappy.”) And some of the locations — huge underwater compounds, a military headquarters inside a sand dune — are impressive in their scope and detail.

I don’t know if I like G.I. Joe, or recommend it, but I have some affection for it. Doing “dumb” with poise and (sometimes) grace is certainly a skill, and maybe even an art. I think Stephen Sommers has accomplished exactly what he wanted here.

To get an alternate movie review of G.I. Joe: The Rise of Cobra, go to AMC Filmcritic.com