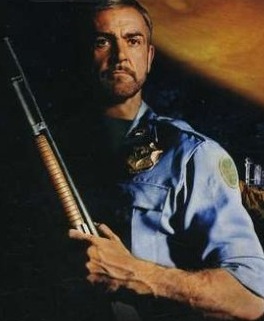 • Warner Bros. is remaking their version of High Noon set on Jupiter, Outland. Something tells me that if Indiana Jones wasn’t enough to pull Sean Connery out of retirement, this won’t do it either.

• Secrecy is so rampant around the final Doctor Who specials that even some of the actors don’t know how the Doctor is getting offed.

• Hero Complex talks to District 9 director Neill Blomkamp about how to stretch a scifi budget, which is admittedly a whole lot easier these days thanks to CGI.

• The Terminator franchise continues to face peril, as the production company who owns the rights files Chapter 11 bankruptcy. As long as it spares us another McG Terminator, that’s fine with me.

• Leonard Nimoy explains the origins of the Vulcan salute.

• Big Finish’s contract to produce new audio Doctor Who dramas has been renewed until 2010. Excellent news: I find Big Finish’s work to be far stronger than the Davies series.