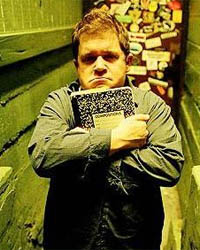 • Smallville is running out of characters to even implausibly cram into the Superboy myth, so it’s no surprise that they are scraping the bottom of the ice barrel and introducing The Wonder Twins next year.

• Despite the fact that Sam Raimi reportedly hated his ideas for a screenplay to Spider-Man 4, Sony has picked James Vanderbilt to write the fifth and six installments.

• X-Men Origins: Wolverine was borderline unwatchable, but with Bryan Singer and his Usual Suspects co-writer Christopher McQuarrie behind the camera, a sequel might just be as good as X-Men 2.

• Den of Geek posts a surprisingly intriguing retrospective of the costume design of Deep Space Nine. Come to think of it, the outfits were rather elaborate.

• io9 lists awesome vintage scifi monsters that came from beneath the ice to destroy the world.

• Newsarama has more details about the recent Superman verdict taking away the rights to Krypton from DC: apparently, it was all prompted by a comment from comic historian Dennis Hitchens on the Newsarama website.