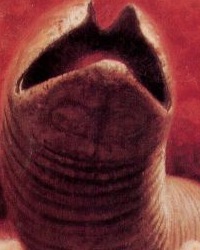 • Fox is promising that they won’t mess with Dollhouse this season. Unfortunately, that’s a promise they won’t be inclined to keep out of just the goodness of their hearts.

• Ridley Scott is all set to direct another dystopian movie, this time an adaptation of A Brave New World by Aldous Huxley.

• I am so glad this is still in play: Brian Henson says pre-production of the sequel to The Dark Crystal has now started, and the movie has a “very” strong script.

• The plains of Saturn’s moon Titan are now set to be named after a planet from Frank Herbert’s Dune novels. Here there be sand worms.

• The Guardian lists their top ten choices for time-traveling novels. Half of these I haven’t read, but I do want to.

• Where I Write shows the prose cribs of some of scifi’s greatest authors.