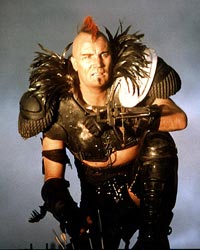 • David Twohy and Vin Diesel say that when a third Riddick movie comes to theaters, it’ll have a hard R rating.

• The upcoming Bruce Willis scifi vehicle, Surrogates, has a cyborg advertising campaign that was ripped off of a Worth1000.com photoshop contest… inspired by Surrogates!

• The director of The Time Traveler’s Wife doesn’t want you to call his movie a “science fiction film” because “the time travel is an allegory.” Sounds like he thinks labeling it a genre movie will somehow besmirch its dignity.

• io9 asks DC whether or not the Green Lantern Blackest Night event will be used to bring back dead characters like Martian Manhunter and Aquaman. The response is telling.

• Will Jeremy Renner be the next Mad Max? He says he’s up for the role, which would begin filming next year.

• Steampunk LEGO Star Wars is always good for a Tuesday morning. Or a Thursday brunch.

• Check out some gorgeous concept art for the Thundercats movie that never was. I would have thought a live-action version would be a recipe for furry disaster, but this is great looking stuff.