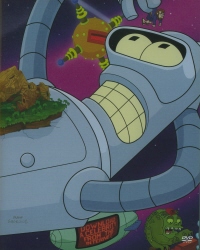 • If anything can put an end to Torchwood, it’s the departure of star John Barrownman, whose charisma is pretty much the only thing holding the show together. So good news, haters: He’s leaving Torchwood to go star in Desperate Housewives.

• Gremlins 3 might well become a reality, if Chris Columbus and Joe Dante have their way.

• There really wasn’t any doubt, but Fox has signed a deal with all the original voiceover artists for the next season of Futurama after all. They’ve played hard ball with the Simpsons actors like this as well.

• If Avatar’s a success, what’s the next project for James Cameron and his innovative new CGI technology? The Japanese cyborg manga, Battle Angel Alita.

• The Onion‘s AV Club has posted a great list of 21 comic artists who changed mainstream comics (for better or worse). It’s a fascinating read from an engaging critic.

• What if John Lennon had become a zombie before joining The Beatles? Paul is Undead: The British Zombie Invasion, to be published next year, will give the answer to that puzzling question.