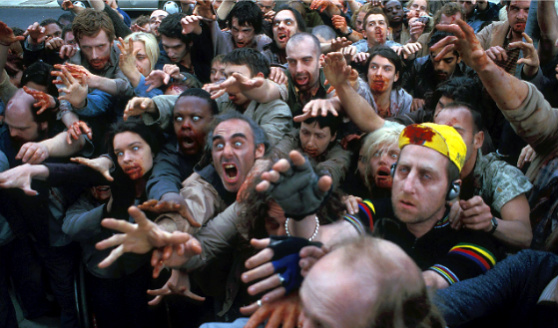 When it comes to quoting horror movie dialogue, there’s a thin line between clever and stupid. It’s all in the timing: Randomly firing off quips — or worse, monologues — is a one-way ticket to social Siberia. But choose your line and your moment wisely, and you’ll be hailed as the pope of of pop-culture parrying. So leave Shakespeare to the brainiacs (though that guy could really turn a phrase) and arm yourself with these comebacks, put downs and zingers, handpicked from eight decades of scary movies. Oh, and no funny voices, except where otherwise noted.

1. “Who died and made you f–king king of the zombies?” (Shaun of the Dead, 2004)
Best. Put down. Ever. Need to take some smug, bossy, would-be leader of the pack down a peg? Wait and beat, lob this little number into the conversation and sit back. The ensuing laughter will shrivel that outsized ego to the size of fly dirt.

3. “I have come here to chew bubblegum and kick ass… and I’m all out of bubblegum.” (They Live, 1988)
Tricky, but when it works everyone knows the life of the party has arrived, especially if declaimed from the doorway while brandishing a six pack (not a shotgun… not even a toy shotgun). Follow immediately with a conventional greeting in a normal tone of voice; otherwise you look like a jackass. Suitable for keggers and other raucous gatherings; while there may be a woman somewhere in the world who can pull off this line, I’ve never met her. Oh, and don’t mangle it: The bubblegum chewing comes first (hear for yourself).

4. “You gotta be f–king kidding me.” (The Thing, 1982) For conveying sheer, aggrieved astonishment at some especially unforeseen turn of events — say, a human head with spider legs, scuttling across the floor — this one is hard to top. It’s not suitable for all crowds, though; if they don’t realize it’s a quote, you just sound foul mouthed.

5. “They’re heeeeeeeeeeeeere.” (Poltergeist, 1982)
How better to signal that the visitors who just showed up are unwelcome? But you have to be willing to deliver it in the sing-song tones of little Carol Anne Freeling (Heather O’Rourke), and to draw out “here” as long as human possible. Doesn’t work otherwise.

6. “They’re coming to get you, Barbara.” (Night of the Living Dead, 1968)
A fine reality check for worrywarts who see a mugger in every late-night pedestrian, a rabid berserker in every squirrel and a motorpsycho behind the wheel of every car. If the nervous nellie’s name actually is Barbara, you might accept the fact that you will never, every top this moment. Tip: “Barbara” has three syllables, accent on the second. Can be delivered deadpan or in spooky voice.

7. “It’s alive! Look, it’s moving! It’s alive!! It’s alive!!! It’s Alive!!!!” (Frankenstein, 1931)
Wake the guest who fell into a druken stupor and slept it off on the couch with this line. The sarcasm will probably be lost on the kind of person who passes out at parties, but it will make you feel better and amuse the hell out of anyone else who happens to hear it.

8. “We all go a little mad sometimes.” (Psycho, 1960)
Comfort the friend who spent the rent on a pair of shoes, or convey your extreme displeasure with the employee who tried reverse psychology on a balky client and lost the account: It’s all in the tone. Compassionate purr says the former, icy deadpan the latter.

10. “We accept her! One of us! One of us!” (Freaks, 1932)
Test your pal’s new boy or girlfriend with this memorable chant; while fidelity to the original quote is usually a most, with this one it’s permissible to change “her” to “him” when appropriate. Must be done as a group, preferably around a table so everyone can pound on it. If the significant other laughs, he or she will fit right into your movie-loving social circle. Remember: If you’re the only one chanting and pounding, you’ll look really, really stupid.