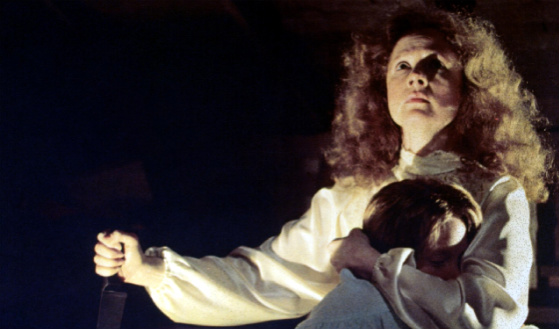 Once upon a time, horror-movie fandom was a Boys’ Club: No cootie-ridden girls allowed. But we’ve come a long way, baby, as today, every dark-and-scary night is ladies’ night with women making up a solid half of the audience for fright flicks. Remember the thrill of seeing Halloween‘s Laurie Strode (the inimitable Jamie Lee Curtis) stand up to the bogeyman with a knitting needle? Well, there’s more where that came from.

The Flick: The Descent (2005)
The Chicks: Sarah (Shauna Macdonald) and Juno (Natalie Jackson Mendoza)
The Reason Why Chicks Love It: Take a pack of estrogen-fueled thrill-seekers, drop them in an unmapped cave somewhere in the Appalachian Mountains, unleash something super-nasty on them, and, rest assured, they won’t run and scream: They’ll bring it on. Even in this dude-free zone, Sarah has the final-girl look; and who doesn’t love to hate Juno, the alpha bitch who gets them into this mess? The Descent knows that women’s friendships are complicated.

The Flick: Scream (1996)
The Chick: Sidney Prescott (Neve Campbell)
The Reason Why Chicks Love It: Once upon a time, slashers slashed and women suffered. But good-girl Sidney Prescott turns the tables on the ghost-faced killer hacking his way through her friends. And she does it without popping her top, dropping her drawers, taking long showers, or skinny-dipping at midnight. Sidney just gets smarter and tougher with each sequel. It’s a little sad to see her retreat behind elaborate walls (literal and metaphorical), but, hey, it’s a harsh world. A girl’s gotta take care of herself.

The Flick: Species (1995)
The Chick: Sil (Natasha Henstridge)
The Reason Why Chicks Love It: When My Fair Lady‘s Henry Higgins wondered why a woman couldn’t be more like a man, I don’t think he was secretly wishing for female serial killers. But alien babe Sil does represent a certain quantum leap forward, equality-of-the-sexes-wise: She wants one thing and one thing only from a man, and once she gets it, she kills him. She isn’t a role model (“Repeat after Mommy, sweetie: ‘I do not want to grow up to be a human praying mantis’.”), but she is awesome.

The Flick: Night of the Comet (1984)
The Chicks: Regina (Catherine Mary Stewart) and Samantha (Kelli Maroney)
The Reason Why Chicks Love It: Sisters are doing it for themselves in post-apocalyptic Los Angeles, where, long before Buffy slayed her first vampire, resourceful siblings Samantha and Regina juggle typical teen concerns like boys (in seriously short supply) and shopping with zombified ghouls. Imagine 28 Days Later crossed with Valley Girl, complete with acid-washed jeans and ’80s hair. The sibling banter is spot-on, and you have to love a cheerleader who knows her mini-machine-guns.

The Flicks: Alien (1979) and Aliens (1986)
The Chick: Ellen Ripley (Sigourney Weaver)
The Reason Why Chicks Love It: She had us at, “Get away from her, you bitch!” Anyone who can talk that way to the nightmare of all alien queens is straight-out off the hook. Ripley stepped up to the plate in Alien, manning up while the men of the Nostromo were protecting their man parts. But in Aliens, she’s a whole ‘nother Ripley: She’s been through a fire that burned away everything but her will to beat those damned things, and if they go for little-girl Newt, then Ripley will make sure they burn in hell. Now that’s a whole lotta woman.

The Flick: Carrie (1976)
The Chick: Carrie White (Sissy Spacek)
The Reason Why Chicks Love It: Mean girls are a high-school constant, the bane of every girl who ever felt too fat, too plain, too smart, too flat, too poor, too naïve, or too uncool. When poor little church mouse Carrie opens a can of psychic whup-ass at the prom after suffering indignity, that collective gasp you hear is grown girls secretly acknowledging that they would have done the same thing. Carrie‘s chick-flick greatness lies in the fact that teens can groove on the payback, while women appreciate its complex emotional truths: Life is miserably unfair, the sweetness of revenge is fleeting, and psychic scars are forever.

The Flick: Attack of the 50 Foot Woman (1958)
The Chick: Nancy Archer (Allison Hayes)
The Reason Why Chicks Love It: Yes, heiress Nancy is an alco-rexic tramp, but that doesn’t mean it’s OK for her freeloading husband to plot her murder so he can decamp with her money and his trashy mistress. It’s hard not to cheer when a chance encounter with an alien turns her into a supersize bundle of righteous wrath. This one’s for every gal who ever wanted to crush her cheating man like the bug he is.

The Flick: I Walked With a Zombie (1943)
The Chick: Betsy Connell (Frances Dee)
The Reason Why Chicks Love It: Sensible Canadian nurse Connell takes a job in the West Indies, caring for the near-catatonic wife of wealthy sugar-plantation owner Paul Holland (Tom Conway). Is the hollow-eyed Mrs. Holland mad, sick with a strange tropical disease, or the victim of a voodoo curse? This elegant, beautiful variation on Jane Eyre adds exotic tropical color — and walking dead — to Charlotte Brontë’s classic tale. It’s swooningly romantic, ferociously smart (about race and class, as well as love), and ravishingly beautiful…with zombies.

The Flick: Cat People (1942)
The Chick: Irena Dubrovna (Simone Simon)
The Reason Why Chicks Love It: Men are from Mars and women are from Venus. Or maybe women are from some shadow-shrouded world seething with dangerous desires and divided loyalties. Can the marriage of the doom-haunted Euro kitten Irena and her bland, blond, All-American boy be saved? Look past the catty puns, and this atmospheric thriller is a razor-sharp dissection of marital dynamics and the way relationships founder on compromises.