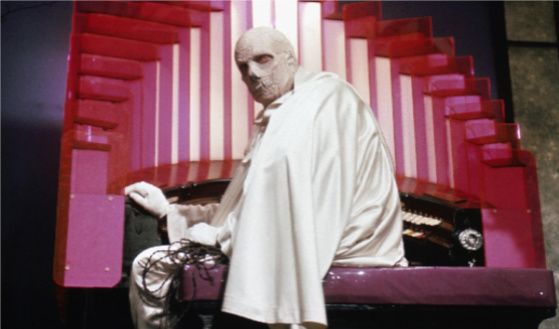 You know, every once in a while it’s OK to leave the house. I’m not implying that you’re anything but extremely popular, blessed with a rich social life. I’m just reminding myself that there’s a big, beautiful world of movie theaters out there… I mean, why else would I set foot outside? I need to remain relevant and “happening,” as the kids say, which means keeping up with the new.

But let’s say you’ve diligently seen everything out there. Should you sit at home and stare at the walls? That’s an option, of course, but you could also check out one of these movies. All the fun of being in the theater without the sticky floors… unless you’re a total slob, and that’s cool too.

Like Dead Snow? Try Shock Waves
I mentioned both these flicks in my recent piece about the varieties of the cinematic undead, but it never hurts to mention them again. If you dug the recent Norwegian Nazi zombies-in-the-snow effort Dead Snow, then be sure to check out Ken Wiederhorn’s 1977 Nazi zombies underwater movie. Shock Waves features Peter Cushing, Brooke Adams and plenty of decaying atmosphere to (jack)boot.

Like Drag Me to Hell? Try Evil Dead 2: Dead by Dawn
OK: This one seems obvious. What horror fan hasn’t the 1987 cult classic? But think of the children! Think of that poor, innocent newbie who wandered into a showing of Sam Raimi’s spookhouse fun-ride and emerged from that hungry for more. It’s our job as seasoned genre vets to guide kids to the good stuff, and anyone who thrilled to Allison Lohman battling gypsy-spawned demons will, like, extra thrill to the exploits of Bruce Campbell battling Necronomicon-spawned demons in that cabin in the woods. So do your part: Invite some young friends over and fire up the DVD!

Like Twilight? Try The Lost Boys
I know it may be difficult to get the Twihard crowd to smaple anything else: Teenaged girls are flocking to this swoony vampire movie for the Romeo and Juliet-style romance, not the blood sucking. But we’re here to save the exception, the rebel soul who walked into Twilight looking for blood and got nothing but sparkles. If you can get past the delightfully ’80s hair and fashion, there’s no better teenage vamp flick than the one featuring Kiefer Sutherland and the Coreys, Haim and Feldman.

Like Saw? Try The Abominable Dr. Phibes
The Saw train just won’t stop a-chuggin’. Year after year, Jigsaw returns to enforce his bizarre sense of morality via elaborate death traps. Well, Vincent Price was doing the same thing — if in a decidedly campier fashion — way back in 1971. Dr. Phibes is all about flamboyant revenge, as he ensnares those he holds responsible for his wife’s death in outrageous — and deadly — set pieces. And while he returned in Dr. Phibes Rises Again (1972), he had the grace to stop before wearing out his welcome.

Like Orphan? Try Joshua
I love killer kid movies, from The Bad Seed to Bloody Birthday, I simply can’t resist a flick with a terrifying tot wreaking havoc in the lives of parents and others. I’ll be first in line on July 24 to see Orphan, the tale of 9-year-old Esther, an adopted child with a heart of pure evil. She’d get along great with 9-year-old Joshua, who lets nothing stand in the way of what he wants — poor Vera Farmiga plays the beleaguered mom in both. Joshua (2007) is more atmospheric, creepy, and understated than the average killer kid movie, and while it may raise more questions than it answers, it was unfairly overlooked.

So there you go: Horror movies to watch at home after you go out to watch horror movies. What, you have something else to do? I sure don’t, though these floors could use a good mopping…