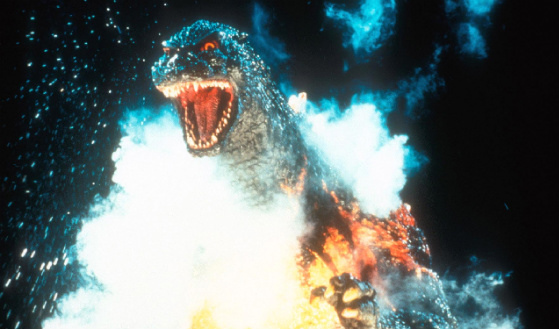 Hey, remember that time I wrote up a handy field guide to B-movie monsters? Well, in the interests of science, horror and your quality of life, I’m back with another installment. So put on your lab coats, kids, and let’s talk monsters!

Godzilla (aka Gojira)
Habitat: Originally Tokyo and its environs, now global.
Description: Between 150-350 feet tall and 20-60,000 tons. Dinosaur-like, with atomic breath and a distinctive roar
Movie career: Since his eponymous movie debut in 1954, Godzilla has both terrorized and defended citizens of the world. He frequently battles other kaiju (giant monsters), including Mothra, King Ghidora and a robot doppleganger called Mechagodzilla. He’s adopted sons, appeared in almost 30 movies and become a comic book and cartoon sensation. In short, there’s not much Godzilla can’t do… except, perhaps, find true love.
Required Viewing: Gojira (1954), Destroy All Monsters (1968)

Killer Snakes
Habitat: From the Amazon to the desert… everywhere. Maybe even in your toilet!
Description: Garden hoses with mouths and fangs, ranging in length from a few inches to a whopping 80 feet.
Cinematic career: Snakes give lots of folks the heebiest of jeebies, so they’re a natural fit for the world of horror cinema. Sometimes they’re just massively huge buggers (Boa vs. Python), sometimes they’re numerous and venomous (Snakes on a Plane), sometimes they used to be human (Sssssss), and sometimes they want to see some scenery when they take a break from gobbling up travelers who should have flown (Snakes on a Train). On second thought, maybe hitchhiking is safer than planes or trains, because snakes can’t drive.
Required Viewing: Rattlers (1976), Anaconda (1997), Python (2000)

Dolls/Dummies
Habitat: Stages, shelves, closets, at the end of your arm.
Description: Generally made of wood, plastic or porcelain and under three feet in height.
Cinematic career: In our efforts to keep the public safe, we at AMC have warned you about killer dolls and dummies. Several times. These little anthropomorphic psychos have a long and varied movie history, beginning in 1929 with The Great Gabbo, and this creepy subgenre isn’t dying anytime soon: There’s a rumored remake of the 1988 classic Child’s Play in the works.
Required Viewing: Dolls (1987), Dead of Night (1945), Devil Doll (1964)

Sharks
Habitat: Oceans… and the canals of Venice.
Description: Cartilaginous fish with one exceedingly bitey end
Movie career: Though Steven Spielberg’s Jaws briefly took the giant shark out of the realm of the B-movie, it wasn’t long before the great white was back where it belongs. Whether leaping from the water in pursuit of jet airliners (Mega-Shark vs Giant Octopus) or roaring their way to the Bahamas in pursuit of the Brody family (Jaws: The Revenge ), sharks are, as I’ve pointed out in the past, tons of toothy terror and awesomeness.
Required Viewing: Shark Attack 3: Megalodon (2002), Open Water (2003), Deep Blue Sea (1999)

Corman Creatures
Habitat: From the depths of outer space to the most remote cave and isolated island. Nowhere is safe.
Description: Their infinite variety is such that they’re beyond describing in their — why, to even attempt to do so would drive you mad!
Movie career: Folks, I’m talking about the monsters found in the movies of producer/director par excellence, Roger Corman. Don’t let their simple names fool you, because these baddies are super deadly! Check out the Beast ( Beast from Haunted Cave ), the Creature (Creature from the Haunted Sea), It (It Conquered the World ) and the Giant Leeches (Attack of the Giant Leeches), to name but a few. Give Corman credit where it’s due: He believed in titles that tell you all you need to know. Foam rubber and slime are the icing on a deliciously silly cake.
Required Viewing: Little Shop of Horrors (1960), Humanoids from the Deep (1980), The Wasp Woman (1959)

Watch Devil Doll here at AMC, but look out — that Hugo is one mean old wackadoo dummy. But you read the guide, so you knew that. Right? If not, go back to the beginning and commit the details to memory so I can rest easy tonight, secure in the knowledge that you’ll recognize danger when it’s coming your way.

A fan of horror movies and scary stuff, Stacie Ponder started her blog, Final Girl, so she’d have a platform from which she could tell everyone that Friday the 13th Part 2 rules. She leads a glamorous life, walking on the razor’s edge of danger and intrigue.