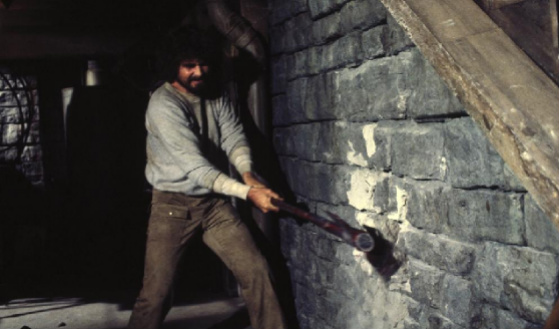 Hey, remember when we talked about great horror taglines and how the very best ones got you so excited you could hardly stand to wait to see the movie? And how they stick in your head even after the movie has faded? That was cool. But let’s face it — Mission Awesome Tagline doesn’t always succeed. In fact, sometimes a tagline is so awful that the effect is the complete opposite of what was intended: It acts as a sort of audience repellent.

The art of the tagline is an arcane one, you see, and the reasons they can end up sucking are legion: They’re dull, nonsensical, needlessly complicated, too wordy, or not wordy enough. In my book, the worst offenders are those that fall into the bad-pun category. Please, whoever is responsible for these things, I beg you: No more bad puns! With these guidelines in mind, here are ten of the lousiest horror-movie taglines in history.

2. Suspiria (1977): “The only thing more terrifying than the last 12 minutes of this film are the first 92.”
Let’s see — so that means it’s 104 minutes long, which means… Wait a minute, this is a tagline about math. And subject-verb agreement. I’m bored.

3. The Faculty (1998): “Take me to your teacher.”
Teen comedy? Classroom drama? Horror picture about alien parasites? A hint would be nice, Mr. Tagline Writer.

4. Dracula’s Daughter (1936): “She gives you that weird feeling!”
Is there a more noncommittal adjective? “Weird” like, “I thought I left my car keys in the ashtray”? “Weird” like, “That’s not my shade of lipstick on his collar”? “Weird” what?

7. Friday the 13th (2009): “From the producers of The Texas Chainsaw Massacre.”
Not the writer. Not the director. The producers. As in, the guys who put up the money. I should care, why?

8. Ape (1976): “Not to be confused with King Kong.”
Or Bride of the Gorilla or Congo or that giant dust bunny behind your sofa. You guys must think I’m pretty dumb. But I’m not dumb enough to pay for your movie.

10. Black Christmas (2006): “This holiday season, the slay ride begins.”
“Slay ride,” get it? You know, like “dashing through the snow,” only, instead of “sleigh,” it’s “slay,” because they sound alike but mean different…Oh, forget it.

As you can see, even a great movie can fall victim to a horrible tagline. It’s a good thing Alfred Hitchcock’s name (unlike, say, Stephen King’s) could get people into theaters, because if Psycho‘s box office had depended on that wishy-washy sell, it would’ve tanked.

So I guess this means that maybe I shouldn’t prejudge movies based on the crap on their posters, right? Maybe? Wow, look at me, learning a lesson! I hope The Pit will follow my suggestion and consider a remedial math course — jeez, even I know three halves don’t make a whole.

A fan of horror movies and scary stuff, Stacie Ponder started her blog, Final Girl, so she’d have a platform from which she could tell everyone that Friday the 13th Part 2 rules. She leads a glamorous life, walking on the razor’s edge of danger and intrigue.