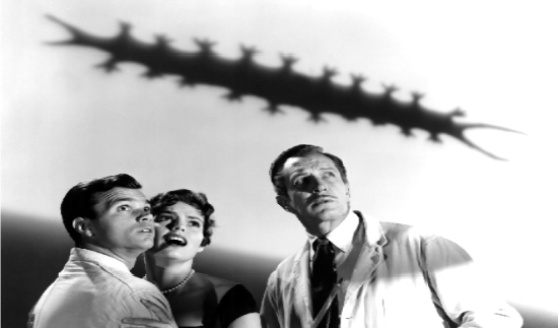 A wise man once said, “the only thing we have to fear is, fear itself!” Well I’ll lay down a twenty-spot that dude never had a mind-controlling parasite worming its way through his skin, guts or reproductive parts. Anyone want to take that bet? If you do, perhaps you should first read my top ten list of parasitic-horror flicks.

10. Parasite (1982)
It’s called “Parasite” and was in 3D. That’s enough to get it on the list. Not much else is, granted, but our judges couldn’t ignore those two factors.

9. Shivers (1975)
This David Cronenberg joint was filmed as “Orgy of the Blood Parasites.” Now, I don’t know what makes you part with eleven bucks worth of theater-admission money, but hell, I’d pay twice to see that movie once. Well, that is until you actually see it; then you’ll want your money back. But it’s too late, because you already paid for it twice, you idiot. This Afterschool Special on STDs meets swinger-porn focuses on the residents of an apartment complex. Do they have community? Are they open with each other? Are their special parts crawlin’ with mind-controlling critters? Watch it, if you dare!

8. The Brain Eaters (1958)
One thing’s for sure, and that’s horror-movie characters haven’t gotten dumber — they were always dumb. Note to you, Dear Reader: If you see an alien ship hanging out in the woods, do not say “I have no idea what that is,” and then go investigate. Fire up the Iron Maiden in your iPod and run for the hills. Watch for yourself in yet another “must see” trailer.

7. Star Trek II: The Wrath of Khan (1982)
No, I am not a Trekkie, but I stand by this decision. That scene where Khan drops the crawlies into the helmet, then puts it on Chekov’s head? Where you see that thing cut through his face and slide up inside his ear? Damn! I don’t care if Star Trek II is a liberal-lovin’ PC “let’s set an example for all of humanity with our spacemen” movie, that scene is still badass. And then, you know, the parasite helps control Chekov, so count it.

6. The Puppet Masters (1994)
When it’s time for a big flappy black thing to land on the back of your neck and drive you around like a showroom Hundai, look no further than Puppet Masters. Alien space slugs? Donald Sutherland’s scowl? A Robert A. Heinlein novel come to life? Sold!

5. The Thing (1982)
Here is one equal-opportunity parasite: Black dudes, white dudes, Russians, Americans, dogs, deer… it really doesn’t matter, as long as there’s some biomass to corrupt. This bad boy will reshuffle your parts like it’s playing biological Boggle, and it’s high time we had remake (OK, another remake, since this was John Carpenter’s take on the classic 1951 Thing). Call me crazy, but I think Ryan Reynolds is the perfect guy to put a new gloss on Kurt Russell’s classic performance as R.J. MacReady.

4. The Tingler (1959)
This 1959 American movie (because if it had been French, it would have been “Le Tickler“) starred Vincent Price, was directed by William Castle and featured a slug-like parasite that lodges in the victim’s spine. The parasite kills the host unless the host kills the parasite by screaming, so there’s a whole lotta screaming going on. But the super-cool-ass part of The Tingler? Showman Castle bought surplus WWII military buzzers (they were used to de-ice planes) and, ever the humanitarian, had them wired to select theater seats. When the tingler slug appeared to tear through the screen, Price’s voice rang out “The Tingler is loose in this theater! Scream! Scream for your lives!” Then the buzzers went off. There were no reports of anyone dying of fright, but underwear salesmen reported brisk business the next day. You have to see the trailer.

3. The Ruins (2008)
Once upon a time, I claimed that a movie about a killer vine could be and was scary. I stand by my statement: It’s the only plant parasite in our bunch and its biology is unique. This vine mimics sounds, using the dulcet tones of your friends and lovers to draw you in and kill ya, and/or uses your bod to incubate a skin-crawling parasite that eventually becomes new vines. You can see them wiggling under your skin like snakes under a flesh-toned blanket and man, that’s nasty. Think of it as the plant version of your little brother, chanting “I know you are, but what am I,” and repeating your every word. You know you should leave it alone, but can’t, so you close in and boom, subcutaneous snake-wiggle time. The fatality rate is 100 percent, so be warned: While vacationing, stick to the hotel buffet.

1. Alien (1979)
This classic endoparasitoid goes beyond the silver screen and has become a true cultural icon. Acidosis chestbursticus spawned one amazing sequel, one crappy sequel and a final sequel so bad it defies description, but the original was a new brand of terror. The “Jaws in space” story revealed the true terror of having something inside you against which you have no defense, and let’s face it — chest busters are freakin’ cool. No question, Alien is the number one parasite movie of all time.

But What About the Snatch?
Always a good question, but no, Invasion of the Body Snatchers is not a parasite movie. I repeat, “not.” The alien organism copies the victim, but never actually resides in or on the victim. You can call it a biomimicry movie, but not a parasite movie. Don’t agree with me? Go brush up on Parasitology 101, Chachi.

There you have it, the Top Ten Parasite Movies of all time. If you disagree, you know exactly where you can stick your opinion … in the comments box, below.

New York Times best-selling author Scott Sigler writes tales of hard-science horror, then gives them away as free audiobooks at www.scottsigler.com. His novel INFECTED was named as the Border’s #1 mystery, thriller and horror novel for 2008. His latest hardcover, CONTAGIOUS is in stores now. If you don’t agree with what Scott says in this blog, post a note in the comments section below. Please include all relevant personal information, such as your address and what times you are not home, so Scott can come visit and show you his world famous “Chicken Scissors.”