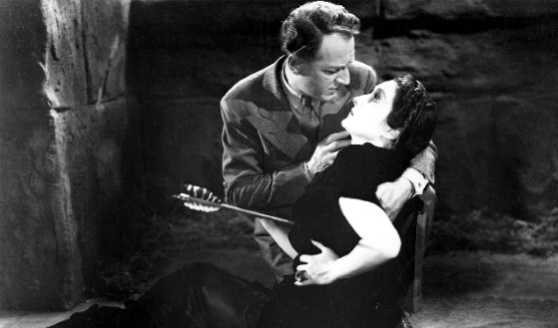 It’s one thing to become a monster, to morph into an undead demon/ genetically altered mutant/alien critter that shreds heads and leaves a string of entrails behind. That’s a good gig, at least until some Final Girl arrives with the “big surprise” that blows you to smithereens. But how about those who were born this way because mom and pop were monsters? That’s a whole different slice of life. It’s all in the breeding, Dear Reader, so let’s take a look at some classic punishing progeny.

Beowulf (2007)
Poor, poor Grendel… can’t someone give this dude a break? His mom is some kind of wacked-out dragon hottie who hangs out in a frickin’ cave, hoarding treasure and probably cooking up H on a golden spoon. His dad? Grendel doesn’t really know the guy who abandoned mom and the kid way back when. He’s got zero schooling and no career opportunities, so he breaks into medieval mead halls and eats people. What, you expected him to ace the SATs and get a free ride to Harvard? No wonder this son of a monster is mad at society, and not afraid to show it.

Seed of Chucky (2004)
Admit it: This is the best name for a monster-offspring movie ever. Seed of Chucky… are you kidding me? And what the hell is wrong with America that this movie never rose above the No. 4 slot at the box office? Seriously, people! Seed of Chucky! Also known as Child’s Play V, it picks up where Bride of Chucky left off. Chucky’s son “Glen” lives the life of a ventriloquist’s dummy and brings back Chucky and his moms for a nice family reunion. Too bad the Chuckster doesn’t see things that way. Piano wire, anyone?

Son of Kong (1933),Son of Frankenstein (1939) and Son of Dracula (1943)
The 1930s and early ’40s were a time of being fruitful and multiplying in monsterland. Was there a blackout or something… maybe a monster boom to predicate the Baby Boom? Whatever the reason, the “greatest generation” kicked out and/or watched some seriously un-greatest crappola; “Son of” or “Daughter of” pretty much guaranteed that time would be wasted by all. They might as well have named them “Son of $,” parts one through five and ‘fessed up to the fact that they were crass efforts to cash in on popular creatures.

Son of Godzilla (1967)
Sad to say, “Son of $” movies survived into the hippie era. In fact, though Son of Godzilla was a Japanese movie, I think we can lay the blame squarely on those damn counterculture types. How? Just look at the preemie lizard that is Minilla, son of Godzilla: Either the filmmakers scored some major acid or Godzilla was real and doing so much smack and blow that his mutant DNA warped into birth-defect territory. Either way, it’s your duty to help make up for this abomination by going to the nearest city park, finding a hippie and giving him a good solid kick in the teeth.

Anaconda 3: The Offspring (2008)
Two words: “The Hoff.” Oh yeah, Anaconda 3 stars David Hasselhoff kicking the crap out of some legless, armless monstrosities. In the trailer, he drops the dialogue diamond of “in about twelve hours, this entire country is going to be overrun with baby snakes.” Boom! Now of course, were these your friendly neighborhood garden snakes, you could squash about ten at a time with your boot heel, but these be anaconda babies and your Doc Martens will only going to piss them off. Then they eat you. Que sera, sera.

Gamera vs. Monster X (1970)
This is some sweet-ass film action here. Our favorite giant bowl of turtle soup gets infected with baby critters. The critters plan to hatch out of Gamera and wreak untold havoc on the world. OK, they’re not Gamera’s babies, but they are babies of a monster, which makes them second-gen and qualifies them for this column. Best part? After a decade of monsters smashing people, people get to travel inside Gamera and take on the parasitic critters. With that kind of sweet plotting, it would seem fair to say it’s just plain impossible to screw up a giant-monster movie. But wait… there was the 1998 version of Godzilla.

Godzilla (1998)
This is here for the sole purpose of preventing you ingrates from making comments like, “what about baby Godzilla!” Yes, I’m aware there was a 1998 American remake of Godzilla. Yes, I’m aware this movie featured a horde of baby T-Rex clones, because a 40-foot-tall lizard clearly isn’t scary enough in and of itself. OK, it’s an American remake. That means we have to “one-up” the original, and make it “accessible” to modern audiences. Makes me think that if there were an American remake of the Mona Lisa, it would be a painting of a Mrs. Potatohead with a poo mustache. This movie also had Matthew Broderick randomly picking up a pregnancy kit to see if the giant monster was knocked up, because, well, you know, that’s everyone‘s first reaction when they encounter a 40-foot-tall lizard that no-one’s ever seen before. Correction: This movie is a Mrs. Potato Head with a poo mustache. Oh, and a note to all future military helicopter pilots: If you’re being chased by a 40-foot-tall lizard, fly up. Because, you know, you know, you can fly and the 40-foot-tall lizard can’t. Might keep you from being eaten.

Birth Control!
Can someone please pass out some free condoms to these creatures? I mean hell, scientists are working on sterilizing mosquitoes. If you can zero on on a teeny mosquito whang, how hard can it be to take a bit off the top of Godzilla? And did I miss any monster offspring? Leave me a comment, Dear Reader, and we’ll take a future look at critter procreation.