Our last discussion on how video game movies are hurting the perception of the interactive medium left little doubt that gamers are feeling a bit, well, pessimistic about the chances of a decent adaptation in their lifetimes. We gaming moviegoers live in a media landscape that needs a shot in the arm, a new perspective. Simply put, we need a hero. And David Hayter might well be that man.

Known to moviegoers as the co-screenwriter for the first two X-Men movies, Hayter is looking to make his directorial debut with the big-screen adaptation of Lost Planet, a reasonably well-received shooter for the Xbox 360. How is it that this man, whose better movies may well be overshadowed by his lesser ones (Hayter also co-wrote The Scorpion King and the recent Watchmen adaptation), is in a position to revitalize the entire video game movie genre? Read on, and prepare for hope.

He’s a bona fide nerd
Watching certain video game adaptations — I won’t name names, but the ones I’m thinking of rhyme with “Fitman” and “Feet Tighter: The Hedge Mend of Pun-Me” — it’s painfully obvious that the screenwriters harbor no affinity for video games or even nerd culture in general. David Hayter doesn’t have that problem; he wants to make geek-friendly fare. His recently co-founded Dark Hero Studios label was created with the explicit intent of producing horror, fantasy, and especially comic or video game-related flicks to a wider audience. A David Hayter movie — even a bad one — will never possess the same halfhearted indifference to its source material as something like, say, Trooper Bario Smothers. 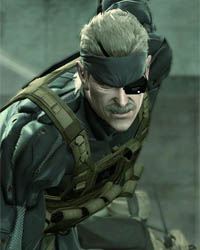 Gamers may not know Hayter’s screenwriting credits by heart, but they most certainly know him as the voice of one of video gaming’s most cherished protagonists: Solid Snake. The hero of four Metal Gear Solid games, Snake is a rarity in the world of gaming; an empathetic but still fantastically bad-ass hero who overcame his derivative roots (the character is not-too-subtly based on Snake Plissken from Escape From New York) to become the driving force of an entire franchise.

Unlike most video game franchises, people don’t buy new Metal Gear Solid games for the actual gameplay — they play to see what will happen to Snake. Though Hayter admittedly has no real writing credits on any of the MGS games, his proximity to one of the most cinematic, narrative-heavy franchises in the entire history of the medium has got to earn him some of our faith. Worst case scenario: Even if his movies suck, he will at least get smiles with an occasional “Metal Gear?!?” grunt during the DVD audio commentaries.

He’s adapting games with crappy stories
I know this is one is counter-intuitive, but stay with me. As I said earlier, Hayter is currently in talks to write and direct a Lost Planet adaptation. Should Hayter’s adaptation of the game suck, you know what fans will do? Absolutely nothing. Because there’s no such thing as a Lost Planet fan. Because Lost Planet, though entertaining, has one of the worst video game storylines of the last decade.

Hayter’s decision to make Lost Planet his first video game adaptation is remarkably shrewd: The game is visually spectacular (imagine Godzilla-sized bugs hanging out on a planet made entirely of snow), but so narratively weak that Hayter’s story literally has nowhere to go but up. Rather than overreaching and attempting to adapt great games like BioShock or Shadow of the Colossus — which will most assuredly not translate into a non-interactive medium as well as Hollywood thinks they will — Hayter’s content to grab the crappiest games from the bottom of the bargain bin and elevate them into something that’s actually worth noting — a feat that no video game flick has yet achieved. If that’s not heroic, well, I just wouldn’t want to know what is.

But what do you think? Will David Hayter save us all from the hulking, evil Metal Gear robot that is Hollywood’s own lack of creativity? Or are we too late for even Solid Snake to save us?