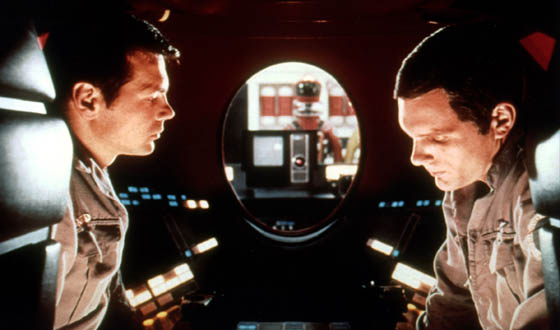 My desktop computer died on Monday, which while annoying was not as bad as it could have been, since as it happens I had already ordered its replacement and it was due to arrive the next day. The new desktop is super-awesome, but it’s also black and sinister looking, like Darth Vader’s desktop. Which naturally got me thinking about computers in science fiction movies, and how so often they seem to be evil. But are they evil, or were they just programmed that way? Below, a sampling of “evil” computers and networks, and my thoughts on their relative badness.

HAL 9000 from 2001: A Space Odyssey (1968)
Well, HAL did try to kill everyone on his ship. But was it really his fault? In later books and movies, we discover the reason HAL murdered everyone was that his programmers set him up with a moral conflict: He’s instructed to keep the true purpose of the mission on Jupiter secret from the astronauts — yet is designed for “the accurate processing of information without distortion or concealment.” Thus, by computer logic, the way to avoid concealing the purpose of the mission is by killing anyone he’d have to keep the secret from. Seems a bit extreme to me, but then, I’m not programmed to process information without concealment. In the end, we see that HAL was just trying to do his job under the impossible parameters his programmers gave him. This is the computer equivalent of blaming the parents.
Evil or Misunderstood? Misunderstood

Skynet from the Terminator series (1984-2009)
It’s a military computer network that becomes aware and then, when the panicked humans try to disconnect it, nukes all the people it can, later unleashing terminator robots on the lot of them. Which seems pretty evil, but hey, imagine you’re Skynet: One second the military entrusts you with all their weaponry, the next it freaks out and tries to kill you — after it’s handed you all of its guns. How are you supposed to respond? Be that as it may, even if one accepts Skynet’s initial nuking of humanity as self-defense, that whole “and now I’ll create shiny Teutonic killing robots to annihilate anyone not already turned into a cinder” part is just morally way over into the dark side. Bad Skynet! Bad!
Evil or Misunderstood? Evil

The Matrix from the Matrix series (1999-2003)
Once again, humans create artificial intelligence and then get all huffy when that intelligence decides the humans have got to go. The three Matrix movies pretty unequivocally set up the Matrix as evil — what else can you call a system that values humans merely for their residual heat — but it’s worth noting that The Animatrix, the anime anthology of stories about the Matrix universe, makes clear that humans treated the A.I. robots like dirt, up to and including going to war with them. And when the proto-Matrix said, “Hey, can’t we all get along?” the humans said, “Well, no, we can’t,” and tried to wipe it off the face of the planet. So while turning humans into large fleshy batteries is over the line, let’s just say that humans are not entirely blameless for their predicament.
Evil or Misunderstood? Evil, with caveats

VIKI from I, Robot (2004)
In Issac Asimov’s stories, robots have three laws designed to keep them from hurting people. Yet in the course of the movie, all the nice, helpful robots suddenly turn glowy red evil as part of a robot uprising coordinated by VIKI, their central hub computer system. What’s up with that? Well, it turns out that VIKI is watching how badly humans are screwing up the planet, and decides that, one, what the humans really need is someone to lovingly keep them in line; and two, that even with the three laws in place, killing a few of the more troublesome humans will make all of humanity safer and happier. And on the surface, that does makes some perfect sense. But benevolent robot despots are still despots, and speaking personally I’m not sure I want a computer to decide who’s a troublemaker and who’s not — because I have a pretty strong idea of which side of that line a computer is going to put me.
Evil or Misunderstood? Friendly evil is still evil

Your turn: Name some more “evil” computers from science fiction cinema and tell the class whether they’re truly evil, or merely misunderstood. And do try to be truthful: No sucking up to our future computeristic overlords, because they’ll know.