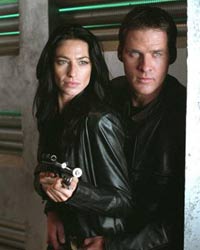 • Heroes gets a teaser trailer for the next season. Wouldn’t it have been wonderful if the last three were worth getting excited about?

• Bryce Dallas Howard — the worst actress of Terminator Salvation by far — is joining the Twilight saga, where she will be in equal thespianic company.

• Edward James Olmos is claiming the Battlestar Galactica U.N. panel caused the international body to change their charter to stop using the word “race” to mean “culture.” There’s of course absolutely no proof of this.

• Biology in Science Fiction explains how Heinlein’s Stranger in a Strange Land could have been ninety percent shorter… through birth control.

• Oh, yes! Yes! Farscape is coming back… as a monthly comic series.

• You too can smell like one of Star Trek‘s dispensible walking body bags.

• Is this the first preview of James Cameron’s Avatar?