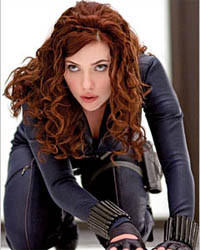 • Either a sophisticated cyborg sent back through time or a drugged out crazy person, a naked Terminator cyborg was tased by police in a Nevada casino — in front of a group of small children.

• The latest issue of Entertainment Weekly has a rather involved Iron Man 2 preview, including the first shot of Scarlett Johansson as Black Widow.

• From the creators of Pride and Prejudice and Zombies comes Sense and Sensibility and Sea Monsters, which sounds even better.

• Willem Dafoe joins the cast of John Carter of Mars as the voice of the six-armed, green-skinned warrior Tars Tarkas.

• The New York Times profiles my vote for the most overlooked genre author of the 20th century, the incredible Jack Vance.

• Robert Simons’ concept art for a 20,000 Leagues Under The Sea movie presents the Nautilus at its finest.