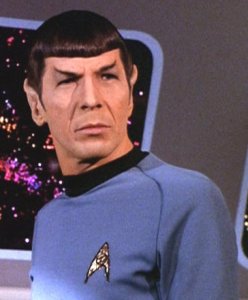 • Waiting for the Watchmen Director’s Cut? Might as well wait until December, when Warner Bros. will release the ultimate edition. Unfortunately, Watchmen was unwatchable even at theatrical length.

• Nimoy says he’s open to doing more Star Trek. He is, after all, still floating around in the rebooted universe.

• A brief snippet of John Wayne footage filmed before his death is finally coming to the big screen… as a resurrected role in a scifi movie.

• Hollywood markets movies differently in different countries, and for Star Trek, it pulled out all the stops, sometimes translating it into an entirely different movie.

• Speaking of Star Trek, YouTube user RedLetterMedia does the most hilarious reviews of Star Trek movies. It’s hard to tell how tongue in cheek this is, but you will (at least) discover the mystery of RedLetter’s dead wife.

• Penthouse discovers the counter-culture of science fiction conventions. And it is, shockingly, SFW.