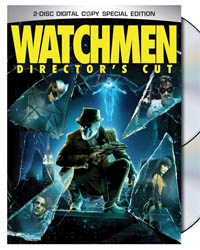 • Just in time for San Diego Comic Con, some of the aliens of James Cameron’s Avatar have been revealed in their ink-skinned glory.

• There was no doubt that Zack Snyder wanted to inject some more comic book content into the DVD release of Watchmen, and so he has. Here’s what you’ll see in the director’s cut.

• Another implausible video game has been optioned for the big screen: Asteroids, the classic vector graphics meteor blasting game.

• A five-meter-long, 1/72 scale model of the USS Enterprise is looking for a new home.

• What do Harry Potter, Star Wars, The Matrix and J.J. Abrams’ Star Trek have in common? They’re all based on the monomyth.