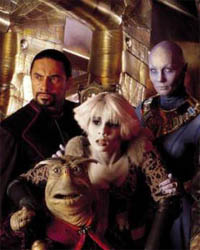 • Robert Rodriguez finally spills the official beans on who will be directing Predators: Nimród Antal, director of the forthcoming Armored.

• My favorite scifi series of all time, Farscape, is getting a mega boxed set, filled with all the seasons, the mini-series, and dozens of hours of extras, to celebrate the tenth anniversary.

• Some more information on this year’s Star Wars live-action series: it has apparently started pre-production, in Australia.

• Terry Gilliam’s next project, Zero Theorem, which seems like Brazil updated for the corporate-cubicle-zombie age, has been scrapped.

• io9 has a roundup of one of my favorite horror-scifi crossover genres: vampires in space

• All of your favorite Star Wars characters as baroque woodcuts.