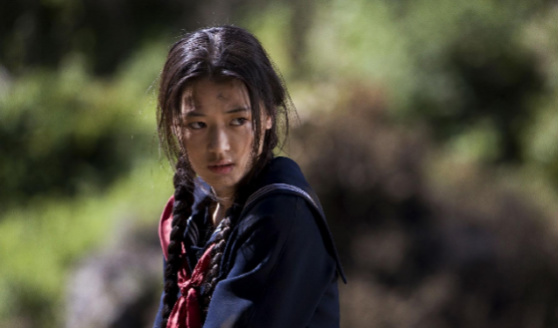 Imagine a cross between Blade and TV’s Buffy the Vampire Slayer, set it on a U.S. Air Force base in Vietnam-era Japan, and add elaborate actionsequences choreographed by martial arts master Corey Yuen. That should give you some idea what to expect from Blood: The Last Vampire, an English-language stew of international genre influences, directed by French filmmaker Chris Nahon and written by Chris Chow, who was born in mainland China, raised in Hong Kong and educated in America.

Tokyo, 1970: Saya (Korean model/actress Jun Ji-hyun, billedas “Gianna”) doesn’tlook a day over 16, but she was born 400 years ago to a legendary warrior and the vampire demon who seduced and murdered him. Having since devoted more lifetimes than she can count to slaughtering creatures of darkness, Saya maintains an uneasy alliance with “The Council,” a clandestine organization that keeps her in blood and safe houses in return for her very special services. She’s seen as a loose cannon by everyone but her longtime handler, Michael (Liam Cunningham), who’s probably the only person in the world capable of persuading her to take a job that demands she swap her sullen, street-chic look for pigtails, knee socks and adorable sailor-style uniform of a Japanese student. Her mission: Clean up the nasty little demon problem that’s cropped up at Kanto Base, a U.S. military installation without drawing undue attention to herself.

Saya finds Kanto Base seriously infested with blood-sucking scum, and is forced to team up with willful teenager Alice McKee (Allison Miller), who happens to see her decapitate a couple of vamps — so much for the low-profile part of her assignment. After the creatures kill Alice’s dad, the girls take it on the lam, warding off demon attacks as they search for the big bad, an ancient demon called Onigen (Kato Koyuki).

Blood: The Last Vampire is part of a saga spread across manga, video games, a TV series, an animated movie and several novels. This installment is essentially an extended remake of the 2001 anime version; the first half sticks pretty closely to the original, while the second is a string of large-scale action sequences a la Crouching Tiger, Hidden Dragon, interspersed with flashbacks to Saya’s 16th-century youth, when her late father’s loyal factotum taught her the ways of the samurai.

The movie’s look is stunning, a shimmering, neo-noir fever dream of neon signs, rain-slicked streets, lonely crowds and enigmatic men in dark suits and darker sunglasses. But the special effects are less than special: The vampire demons, which look like living gargoyles when they drop their human pretenses, are rubbery, and the buckets of CGI blood are conspicuously fake. Blood‘s greatest asset is Jun in her sexy-cute uniform, accessorized with a gleaming samurai sword: She’s a bad-ass Sailor Moon. But nothing underscores stilted dialogue like handing it off to someone who speaks the language imperfectly, and Jun is better seen than heard.

Overall, this take on Blood: The Last Vampire is a disappointment, but nothing short of a stake through the heart will keep the franchise down.