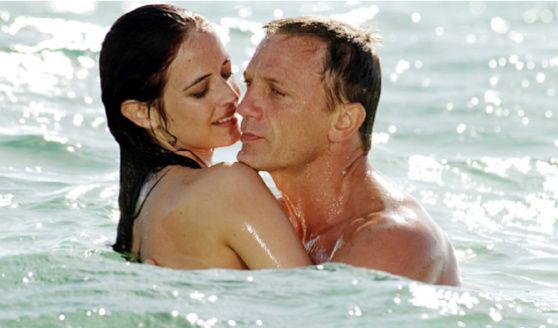 What’s a guy to do when he skyrockets to fame by acing one of the most iconic and beloved roles in pop-culture history? If he’s Daniel Craig, here’s what not to do: Consider starring in what looks to be a lame variation on one of the most overused horror-movie story lines of all time.

OK, maybe it’s not as bad as all that. Some haunted-house movies rule — particularly if they unfold at 112 Ocean Avenue, Amityville, Long Island. But generally speaking, it takes more than a spat with stubborn supernatural tenants to get horror fans’ juices flowing. Which is why the news that lavishly lauded Bond-guy Craig is considering the upcoming thriller Dream House went down like a lead balloon.

“The good news is that [Irish filmmaker Jim] Sheridan is one of the best in the business (My Left Foot, In the Name of the Father, In America),” muses Pajiba‘s Dustin Rowles. “The not so good news is that the film sounds as generic as Daniel Craig’s other non-Bond roles.” Horror Movies Examiner Jeff Swenson is equally indifferent: “I’m not sure why Craig keeps picking movie roles that don’t match the excitement of his Bond role. It’s going to be hard for him to have a career outside of 007 once they spit him out if he doesn’t establish that he’s more than a nice pair of pecs and abs emerging from the ocean.”

It’s never a good sign when the easily excitable horror community responds to movie news with a protracted yawn. So what’s the problem? “Basically, the film goes like this,” writes The Movie Blog. “A man moves his family to a picture perfect little town and into a picture perfect little house…where OBVIOUSLY the ghosts of the murdered previous tenants dwell. Why is it always a house haunted by murdered former tenants?…Just thinking out loud here.” CinemaBlend seconds Movie Blog’s concerns: “The notion of a family moving into a haunted house immediately sounds like some kind of B horror movie, the kind of movie that snags a young starlet, opens at $18 million in January and is never heard from again.” One commentator at ComingSoon sums it up aptly, if not succinctly: “This movie sounds original. Really original. Really really original. Really really really original.”

Yikes. Which isn’t to say they don’t have a point: The premise is tired. Still, Sheridan is a fine filmmaker, known for making challenging choices and bringing a subtle and delicate touch to bear on them. So perhaps there’s more to this project than meets the eye.

DreadCentral is cautiously hopeful: “It just sounds so damned Amityville, doesn’t it? Still, we’re suckers for good ghost stories, and the more the merrier.” Screencrave is optimistic as well: “Sheridan…is a master story teller. This movie will be a chance to show us once again that Craig can lay down a solid performance without relying on his sex appeal and fighting technique.”

FirstShowing‘s Alex Billington sees the part as “an odd choice for Mr. Bond, but an interesting role nonetheless. I’m hoping that this is much more of a creepy thriller like Secret Window (remember that movie?) than a horror movie (like 1408), but from the sounds if it, that’s what we’ll be getting anyway. I’ll be very curious to see what Daniel Craig can do in a role like this.”

Perhaps this is the place to point out the irony of all this concern that Craig can only play Bond: Five years ago, you couldn’t log onto Weather.com without running smack-dab into heated debate over whether he was a suitable choice to play 007. How quickly we forget!

What do you think? Are the Internet naysayers dismissing what could be a savvy move in an anti-typecasting strategy by one flinty-eyed Daniel Craig? He’ll be looking, no doubt, to Web Stalker readers to figure it out — so don’t hold back.