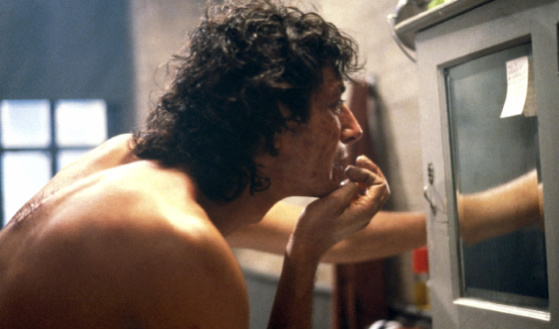 Pssst…. want a free head-to-toe makeover? Before you say, “Sure, go to town,” consider the lessons to be learned from these movies about ordinary folks who underwent extraordinary transformations.

Jack Brooks: Monster Slayer (2007)
Professor Crowley (A Nightmare on Elm Street star Robert Englund) just wants his balky plumbing fixed, but tinkering with the pipes transforms him into a ravenous, lavishly tentacled cross between a snaggle-toothed Jabba the Hutt and one of Dr. Who‘s Daleks. He should have put up with the low water pressure.

The Fly (1986)
In body-horror guru David Cronenberg’s remake of the camp 1950s favorite, scientist Seth Brundle (Jeff Goldblum) accidentally mixes his genes with that of a house fly and gradually degenerates into a hybrid horror cursed with the knowledge of exactly what’s happening to him. There’s something to that “ignorance is bliss” thing.

Sssssss (1973)
Naïve college student David Blake (Dirk Benedict, of the original Battlestar Galactica) takes a job assisting eccentric Dr. Stoner, who’s doing some kind of weird-science research involving snake venom. A word to the wise: Any scientist who runs a roadside snake farm and sells his failed experiments to carnie sideshows is a scientist from whom you don’t want receive any injections of anything, even if he says they’re for your own good.

Remember the “Evil Ash” scene in Sam Raimi’s Army of Darkness? Well, behold the source: An unwitting American reporter in Japan is dosed by a mad scientist and next thing he knows, there’s an eye on his shoulder. It grows into a second head, and doesn’t stop there… you know this can only end in tears. The take-away: Don’t accept drinks from nutty scientists, either — they just want to drug you and turn you into heaven knows what.

The Quatermass Xperiment (1955)
Three astronauts go into space in an experimental rocket, but only one (gaunt UK character actor Richard Wordsworth, who delivers one of the great pathetic monster performances in movie history) returns… and his flesh has been colonized by a parasite that absorbs every living thing with which he comes into contact. The results aren’t pretty.

For a complete schedule of The Fly and The Fly II on AMC, click here.