This past weekend, moviegoers thrilled to the sight of a pack of talking dogs in Pixar’s latest offering, Up. Back in the real world, scientists at the Max Planck Institute for Evolutionary Anthropology were making significant strides towards creating some talking animals of their own. No, they’re not focusing on a doggie collar that can speak Bark, but rather a group of human speech genes called Foxp2 that may hold the key to tapping into the sounds of the animal kingdom.

The gene was first identified in 1998 when researchers found it was the cause of speech defects in more than half of a large London family. Since then, Foxp2 has been isolated as a gene responsible for yappin’ in primates, birds and mammals like mice and dogs. More than ten years later, the Max Planck Institute of Leipzig published in Cell Magazine the results of their experiments breeding a group of mice with a human Foxp2 implanted in their basal ganglia (the speech center of the brain). According to their findings, the speechified mice had a better capacity for language, and “talked” with a low pitched whistle rather than their usual mousey squeak.

Now before you ready your kitchen for a gourmet Ratatouille meal, keep in mind that a whistle does not a sentient — or gastronome — mouse make. Part of the reason the mice haven’t yet developed the capacity to speak English is that Foxp2 is only one of a series of genes that control language. “People shouldn’t think of this as the one language gene but as part of a broader cascade of genes,” Dr. Gary Marcus of NYU told The New York Times. “It would have been truly spectacular if they had wound up with a talking mouse.” 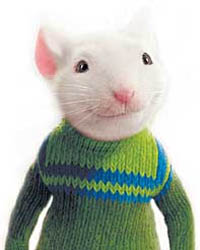 Spectacular, yes. But as science fiction teaches us, if you can dream it, you can do it. While Up‘s dog collars merely translate human speech (as opposed to Foxp2’s ability to grow speech centers in the brain) they also allow the dogs’ owner to train his pals to cook dinner and serve wine. Indeed, if mice were truly able to understand and repeat human language, it may very well lead to them adopting the characteristics of humans. In that scenario, would it really be so far-fetched to treat a mouse like your own child, as Geena Davis does in Stuart Little? In other words, if you give a mouse a cookie, can he learn to ask for a glass of milk?

From singing cockroaches in Joe’s Apartment to every iteration of Dr. Dolittle, moviegoers are fascinated with the idea of talking to animals. While the findings of the Max Planck Institute may be geared towards understanding how humans develop their language capabilities, there’s a glimmer of an idea that it would also be pretty cool to talk to a mouse. Says Dr. Joseph Buxbaum, an expert on the molecular basis of psychiatric disease, “The most surprising finding, and cause for great optimism, is that the gene does seem to have a great effect on pathways of neural development in mice.”

Meaning of course that understanding the gene’s function in the brain can lead to breakthroughs in mental disorders like ones that afflicted the London family. But perhaps we’re also on our way to evening the playing field of mice and men. Will the creatures learn to be chefs, siblings and sommeliers? The answer, my friends, is blowing in their whistle.