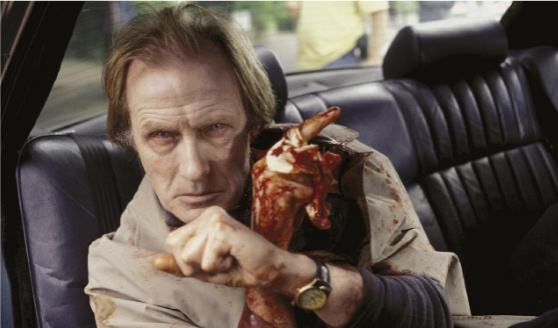 Summer is approaching, and I want to live at the drive-in. The drive-in of my mind, that is, since the bona fide ozoner has largely gone the way of the dodo. OK, so watching two movies back to back on my couch and supplying my own snacks isn’t exactly the same experience, but if I surround myself with with enough like-minded friends, it will do. I suggest you follow suit, perhaps with one of these pairings.

Jennifer and Carrie
Everyone knows Brian De Palma’s 1976 adaptation of Carrie, in which a high school outcast uses telekinetic powers to wreak havoc on her tormentors. But are you familiar with Jennifer, the 1978 knockoff? It’s pretty much the same thing, except that Jennifer controls snakes. The reptiles wreak havoc, the audience cheers.

Night of the Creeps and Slither
When would you like your alien slug movie set: 1986 or 2006? And would you prefer a side of Tom Atkins or Nathan Fillion? Either is delicious. Oh, and fans of the cult classic Creeps should make with the rejoicing: Sony promises a long-overdue, deluxe DVD this fall.

Mulberry Street and Of Unknown Origin
Mulberry Street is what one imagines would result from a one-night stand between a zombie movie and a giant rat picture. Of Unknown Origin features a pre-RoboCop Peter Weller and a giant rodent going mano a paw-o. Perhaps these two movies will share a night of passion and one day we’ll see zombie Weller fighting hordes of giant rats. A girl can hope.

Return of the Living Dead and Shaun of the Dead
Any horror fan worth his or her weight in Karo syrup has seen one or both. But put them together and it’s genre nirvana — two great tastes and all that.

Sole Survivor and Final Destination
As you doubtless know, the Final Destination series is all about the fact that no one cheats the reaper — you may temporarily slip his grasp, but if your number’s up he’ll nab you sooner or later. You may not know, however, that this idea was touched upon back in 1983. Sole Survivor‘s Death may not have devised the kind of Rube Goldberg-esque murder set pieces that distinguish Final Destination, but he does employ a squad of zombie hit men. That’s never a bad thing.

Bad Dreams and Wasp Woman
Bad Dreams and the 1995 version of Wasp Woman have little in common beyond the fact that both star Jennifer Rubin, but that’s enough! A familiar face in late 1980s-early ’90s horror, Rubin starred in A Nightmare on Elm Street 3 and Screamers, and has been a favorite of mine ever since. A little tribute is in order.

Madhouse and The Initiation
The latter stars Daphne Zuniga of television’s Melrose Place and both feature twins, one of whom is — surprise! — pure evil. These two crazy movies ought to get married, with me officiating.

The Craft and Ginger Snaps
I know, you’re thinking witches and werewolves don’t mix. Which may be true, but movies about outcast, wackadoo high school girls belong together, whether the lassies practice witchcraft, become werewolves or just talk smack about you even though they’re your best friend. Teen girls are all the same: Completely frightening.

Frogs and Slugs
Prime examples of why I love the “animals run amok” subgenre.You’ve got oodles of slimy critters getting their kill on, along with a slumming Oscar winner (Ray Milland in Frogs) and exploding eyeballs (Slugs), both of which which guarantee a great time.

So, what summer double features are you revving your engine — or your DVD player?