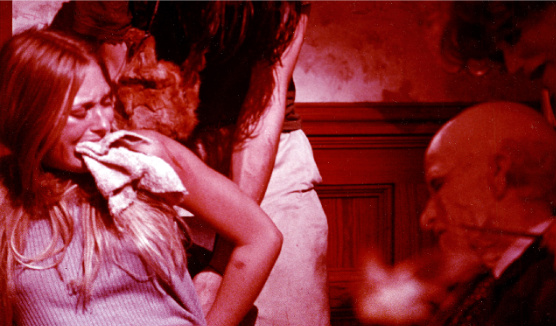 One of the foremost arguments against horror movies is that they desensitize people to real-life violence. There may be some truth to that, but not for me.

While man’s inhumanity to man depresses me, I find the aberrant human mind fascinating. I’ve spent years watching Jason Voorhees go nuts with his machete, but I don’t want to be “entertained” by footage of real-life murder. I watch some crime shows, I read some true crime books and I talk with people who like the remake of April Fool’s Day better than the original. It’s sociological: What makes these wackadoos tick? That may be an unanswerable question, but filmmakers have tried for years to open a window into the serial-murdering mind. While the accuracy and inspiration may vary from movie to movie, there’s no denying that these reel killers are more frightening than Freddy Krueger could ever be, because they’re all real.

Ed Gein
“The Butcher of Plainfield” may have inspired more cinematic psycho killers than any other murderer, and with good reason: When police searched his property in connection with the disappearance of a local woman named Bernice Worden, the first thing they found was her body strung up in his barn, gutted like a deer carcass. More horrors waited inside Gein’s farmhouse: He’d been stealing corpses from a local cemetery and… well, literally decorating with viscera. Lampshades, masks and shade pulls made from human skin, skulls used as soup bowls… Gein was judged insane (you think?) and committed to a Wisconsin psychiatric hospital. He died of cancer-related heart failure in 1984.

John Wayne Gacy
During the 1970s, John Wayne Gacy raped and murdered 33 boys and young men, burying most of them in a crawlspace under his house. He also had a family, was active in civil service, and performed at children’s parties as “Pogo the Clown.” After 14 years on death row, Gacy was executed in 1994.

Charles Starkweather
In 1958, 19-year-old Charles Starkweather embarked on a murder spree left ten people dead, including the immediate family of his 15-year-old girlfriend, Caril Ann Fugate. The duo shot and stabbed their way across Nebraska and Wyoming until a police bullet brought Starkweather down. Starkweather was executed in 1959; Fugate, who maintained that Starkweather held her hostage throughout the ordeal, was paroled in 1976.

Karla Homolka
Homolka and her husband, Paul Bernardo, were convicted iof the rape and murder of two teenage girls; they were also responsible for the rape and death of Karla’s younger sister, Tammy. Bernardo received life in prison, while Homolka struck a plea bargain and served twelve years. Was she truly a battered woman, coerced into abetting her husband? The jury thought so and we have to hope they were right, since she was released in 2005.

Dennis Rader
Rader’s friends and neighbors had no idea that the quiet, unassuming, church-going family man was in fact a vicious serial killer. From 1974 to 1977, he sent letters to the police boasting of his crimes and even coined his own nickname: BTK, for “bind, torture, kill” — his modus operandi. After a years-long hiatus, Rader resurfaced in 2004, and computer forensics led to his arrest a few months later. Rader is currently serving a life term in Kansas for ten murders.

Ted Bundy
No one knows how many women Ted Bundy killed during the 1970s; some estimates suggest the number of victims might be north of 100, but most put it around 35. Bundy escaped from prisons in both Utah and Colorado; he was finally captured in Florida in 1978. and was executed in the electric chair in 1989.

Henry Lee Lucas
Lucas’s first victim may have been his own mother: In 1960, while they were arguing about whether he was going to move in and care for her, Lucas struck his aging mom in the head and the trauma precipitated a fatal heart attack. Along with his sometime-partner Ottis Toole, Lucas is reported to have killed over 300 people, giving him the dubious honor of being America’s most prolific serial killer. Both were arrested in 1983 and sentenced to death; their sentences were both commuted to life imprisonment. Toole died of liver failure in 1996, while Lucas succumbed to heart failure in 2001.

Jeffrey Dahmer
The odor emanating from apartment 213 on North 25th Street in Milwaukee, Wisconsin, led to the discovery of Dahmer’s monstrous acts, which included murder, necrophilia, cannibalism, storing rotting bodies and keeping “souvenirs” from his seventeen victims. Dahmer was handed a life sentence in 1991 but was murdered three years later by a fellow inmate.

Charles Manson
The Summer of Love ended abruptly in 1969, when drifter Manson orchestrated the murders of seven people, including actress Sharon Tate. Though his attempts to incite apocalyptic race riots failed, Manson and his “family” had Los Angeles in a panic for months before he and five of his cohorts were arrested. All six received the death penalty; all their sentences were commuted to life imprisonment.

Jack the Ripper
Perhaps the most famous serial killer of all time, “Springheel Jack” terrorized London’s impoverished Whitechapel area for three blood-soaked months in 1888, butchering at least five prostitutes. Jack — a pseudonym chosen by the killer himself — was neither caught nor identified, and his whereabouts after the known murders remain a mystery.

And now excuse me while I go watch Jason Voorhees punch someone’s head off: At least that can’t happen in real life.