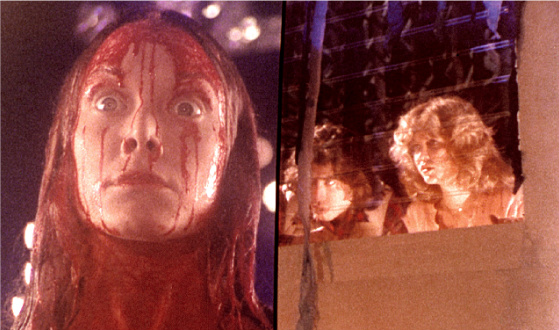 “If you can make it there, you’ll make it anywhere…” the lyrics were written about New York, but if you ask me, the same holds true for school. If you can survive twelve years of hazing, mind-numbing pressure to excel and ritual humiliation by your peers with your sanity and dignity essentially intact, you’re prepared for anything life can throw at you. And that’s just run-of-the-mill high-school trauma — the horror of what my cafeteria called “pizza” can’t compare with, say, classmates returning from the grave to kill kill kill! So watch and learn, young ‘uns:

Tamara (2005)
Cool kids torment shy, unattractive high schooler Tamara relentlessly, until an especially elaborate pranks results in her death. This being a horror movie, they bury the body and pointedly neglect to notify the authorities. Unfortunately for them, Tamara wasn’t just a nerd: She was a witch nerd and returns from the grave 100 percent hotter, deadlier and mad as Hell. Creative kills and gore-o-plenty elevate this revenge flick from familiar territory into… well, familiar territory with creative kills and gore-o-plenty.

The Craft (1996)
If there’s one thing I’ve learned from watching movies and being a girl, it’s that girls are really weird, especially high school girls. In packs, they’re weird and generally mean, and in packs and black clothing, they’re weird, generally mean and sometimes of the witch persuasion. Those are the ones you really don’t want to cross, lest their “light as a feather, stiff as a board” slumber party shenanigans turn into “invoking the guardians of the watchtower of the east” shenanigans and you get your butt supernaturally kicked but good.

Village of the Damned (1995)
John Carpenter took the same approach with this remake (of the 1960 British film) as he did with The Thing: He went to the literary source, in this case, John Wyndham’s The Midwich Cuckoos. You’re not usually cheering for the teachers, but when it’s Christopher Reeve facing off against creepy white-haired alien school children with eeeeerie mind-control powers, well, the Us vs. Them line gets a little blurred.

Trick or Treat (1986)
Heavy-metal headbanger Sammi Curr’s biggest fan calls him back from the afterlife via the mighty power of backwards-record-playing so Sammi can lay waste to his high-school tormentors. Trick or Treat features all the hallmarks of the decade of cheese: Mullets, jocks vs. burnouts, warnings about the evils of heavy metal, boom boxes, Gene Simmons of KISS and familiar faces from Family Ties, Solid Gold and Melrose Place.The sheer, unrepentant ’80s-ness makes it world-class guilty pleasure.

Prom Night (1980)
Ah, prom — that special night in a young person’s life in which the journey to adulthood is marked with tulle, cummerbunds and awkward slow dancing. Or, in Kim Hammond’s (Jamie Lee Curtis) case, all of the above plus mad disco gyrations and the deaths of her closest friends. A night to remember, indeed!

Carrie (1976)
Most high school students fall into one of these categories:

You know who you were.

In any event, pretty much every high school has a Carrie White, the person who — for some arcane reason known only to teenagers — is the designated Other. He or she may be poor or quiet or unattractive or too smart or not smart enough; whatever the reason, the years this student spends walking the halls of school might as well be spent walking in Hell, marking time until graduation day. Unless, of course, the student actually is Carrie White and has bitchin’ telekinetic powers she can use to turn the tide on her tormentors. The take-away lesson: Be nice to people. You know, just in case.

Which example of high school horror is your favorite? Click here to vote.

Revisit the exquisite agony of high school romance on AMC with John Hughes’ Pretty in Pink, June 21 at 6AM EST.