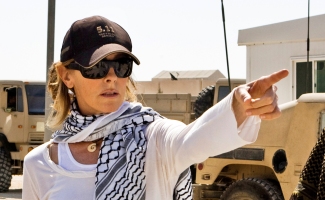 With knock-out action movies like Point Break and Near Dark to her credit, director Kathryn Bigelow works in a field generally considered a Boys Club. What makes her rarer still is that she’s a genre director who respects story and character more than blow-’em-up aesthetics. Her latest, The Hurt Locker, about a military bomb disposal unit in Iraq, is based on the embedded reporting of her co-screenwriter Mark Boal. Bigelow spoke with AMCtv.com in Los Angeles.

Q: How did you create the distinctive look of The Hurt Locker?

A: The fact that I was recreating modern warfare in Iraq — and that the subject was a conflict that’s still ongoing — I knew that I had to be quite responsible and respectful to that fact; I wanted to keep it very reportorial. It began as deep reporting [by co-writer Mark Boal] and the script was designed in such a way as to give you a boots-on-the-ground, you-are-there, fly-on-the-wall look at that conflict. I wanted the filmmaking to have the same feel, to put the audience right there in the Humvee, on the road, in the heat and the sand, and the dust and the sun.

Q: Were there other movies you looked at to get the feel of the movie?

A: Well, there were some documentaries we looked at — but what was the most helpful was actually meeting with EOD [Explosive Ordinance Disposal] techs at various military bases. That kept the subject matter very real and immediate and visceral. I didn’t want to use film or any kind of cinematic handling of [war] as a reference. On the contrary, I felt if I had

seen it in a film before … or felt like it was familiar, cinematically, I would jettison it. I wanted it to feel like the way one might feel in Baghdad.

Q: And then you had the challenge of making a movie that didn’t look like a movie.

A: Exactly. [Laughs]. So try that; it’s like, “Good luck!” We came back from 44 days of shooting with a million feet of film; it was certainly a Mount Everest of editing we were facing. Actually, editor Chris Innis was in Jordan, cutting at the time, not quite up-to-camera, because we had a lag in our dailies.

Q: Did you have to send the dailies out of Jordan to be developed?

Q: At what point did you feel like Napoleon with your supply chain?

A: Oh, my God. Probably pretty early on. You’re shooting in the Middle East, at a time very close to a war zone — in some cases, five kilometers from the Iraqi border. Trying to bring in pyrotechnics across any border. Probably one of the most difficult things to get in was the costumes, the military uniforms. They’re monitored very, very closely, which is a good thing, so they don’t fall into somebody’s hands.

Q: From costume to camouflage?

A: … From costume to camouflage to insurgents. These are all the things that are not necessarily anticipated when you think “Well, we should shoot this in the Middle East, and not New Mexico.” Which was never an option, I would never have done that — but it would have been easier to get military uniforms in New Mexico.

Q: When you were five miles from a war zone, were there days when you said “I could have done some piece-of-crap superhero movie; I could have saved myself all this trouble…”

A: [Laughs] No, I loved it; I loved every minute of it. You look at movies like The Battle of Algiers, and there’s a kind of romance to this type of filmmaking that you’d do it all over again, no matter how difficult or how punishing the heat, or how limited the resources or your budget as a result of deciding to shoot it off the reservation. I’d do it again in a second.