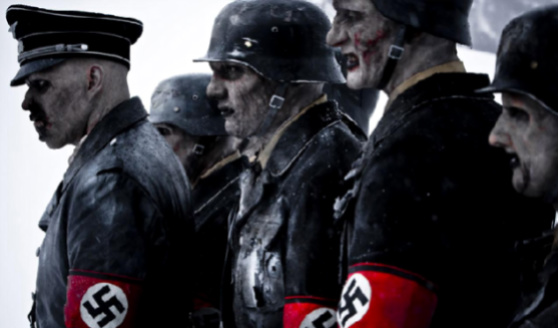 If you see only one Norwegian Nazi-zombie film this year, make it Dead Snow. Seriously: Yes, it’s in a foreign language. Just keep reminding yourself that blood and viscera trump subtitles.

“How many movies start with a group of friends on a trip to a cabin with no cell phone signal,” asks chubby horror geek Erlend (Jeppe Beck Laursen), as he and his pals trudge through the snow en route to, yes, a cabin in the middle of nowhere. Cue the banter about Friday the 13th and The Evil Dead minutia. OK, so Dead Snow knows what it is and where it comes from. And you know what it is and where it’s going. But it’s hard to gripe about a movie pillaging genre classics when the filmmakers make a point of listing their influences for you.

Eight hard-partying medical students embark on a mountain vacation, hell-bent on blowing off some steam. There are two couples: Sensible Liv (Evy Kasseth Rosten) and squeamish Martin (Vegar Hoel); outdoorsy Verland (Lasse Valdal) and Sara (Ane Dohl Torp). She’s so athletic, Sara chose to ski in over the mountains rather than driving with the others. Add four randy singles, two of each sex, and the possibilities are, well, obvious.

They have to park far from the cabin — there’s no road, just a hiking trail — and they’re a good half hour out of cell phone range.But who cares? They’re young, attractive and feckless. They play vigorous winter sports by day, then move indoors at nightfall for a cozy game of Twister, accompanied by flirting, drinking and loud music.

Inevitably, a weird stranger shows up at the door to stomp their buzz — think Friday the 13th‘s Crazy Ralph — with a spooky story. It’s best to tread lightly around these parts, the stranger warns; something bad has been lurking in the dark since WWII when the locals rose up against occupying Nazi troops and drove them into the mountains, where they froze to death. But such potent evil never dies…

The libidinal young people scoff and the wandering crank, his work done, hikes into the darkness, leaving behind a lingering hint of unease. If only Sara would arrive, her friends would all feel better. We already know, of course, that that’s not happening: We saw her hunted down and killed in the frigid woods, to the strains of In the Hall of the Mountain King.

Dead Snow abruptly shifts gears once all the narrative pieces are in place and the wheels begin to turn: What begins as an assured exercise in wringing suspense from set ups that were old when the movies were young becomes a gore-soaked romp a la Peter Jackson’s outrageous Dead Alive — which means we’re talking serious blood and guts. As soon as the zombies (sprinting variety) show up, it’s just a matter of “who will survive, and what will be left of them?” And yes, there is a chainsaw.

None of which is entirely a criticism. Dead Snow is supremely self aware and more than a little smug, but screenwriter Stig Frode Henriksen and director/co-writer Tommy Wirkola know the value of one good image: The last time Nazi zombies were used to such striking effect was in 1977’s Shock Waves, when they rose out of the ocean to menace vacationers stranded on a sun-soaked island. In Dead Snow it’s the grey-faced ghouls melting in and out of the wintery woods or erupting from the snow itself, like rotting land sharks: With their shriveled lips and swastika armbands, they make one hell of an entrance. And if they act according to type, chomping entrails (lots of entrails), drooling blood and tearing people limb from limb, well, that’s why they were invited to the beer bash in the first place.

To get an alternate movie review of Dead Snow, go to AMC Filmcritic.com.