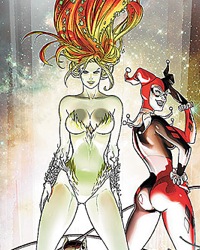 • Transforrmers 2 looks set to make more than The Dark Knight on its opening weekend. That really shoots in the foot the theory that viewers want sophisticated and intelligent comic-book movies, doesn’t it?

• The viewership for Fox’s prospective Ronald D. Moore vehicle, Virtuality, tanks. Of course, it may have been a self-fulfilling death, owing to the show’s time slotting.

• A very thorough write-up of DC’s current plans for the Batman lineup after the Caped Crusader’s recent death.

• SciFi Scanner alumnus Kevin Maher gives his pick for a scifi ending he’d like to change: the original ending to Conquest of the Planet of the Apes.

• Welcome to an astonishing Star Trek-themed restaurant…managed by Captain Picard and Commander Sisko.